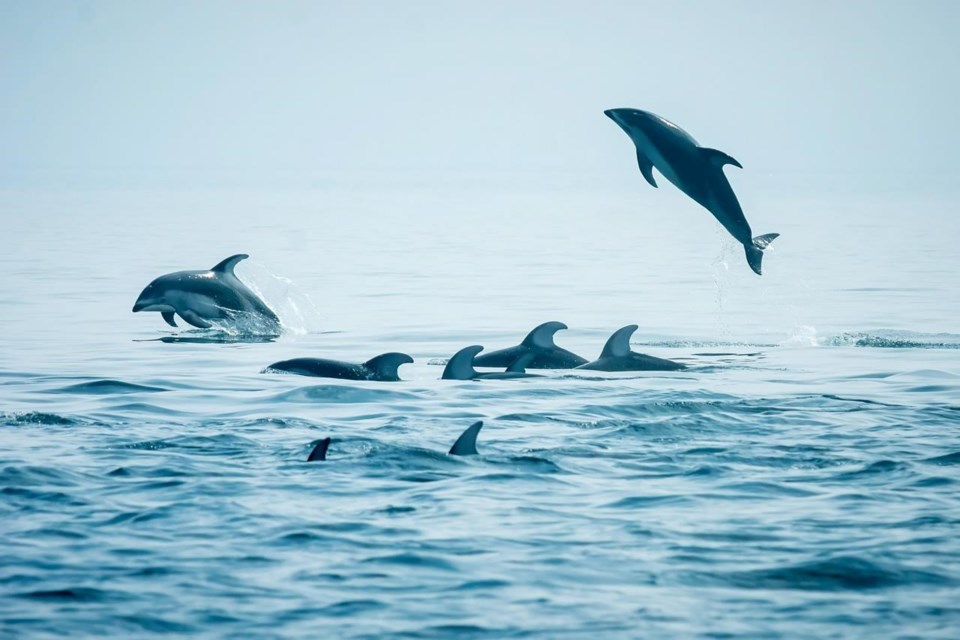 CN - Dolphins delight with return to B.C. waters, but some see 'invasive species'

A commercial fisheries group is dismayed by the appearance of the dolphins. Ocean is "out of balance."

After 100 years of absence, large numbers of Pacific white-sided dolphins are back in the northern part of British Columbia's Salish Sea.

But while their return is being greeted by some with delight, the head of a commercial fisheries group is dismayed by the appearance of what he calls an "invasive species," alongside increasing numbers of seals and sea lions.

Simone Thom, a BC Ferries catering worker, said she was thrilled to see a superpod of hundreds of Pacific white-sided dolphins, frolicking in the wake of a ferry from Comox to Powell River last month.

“It (was) truly magical to see them in their natural state doing their ballet,” said Thom. “I’ve lived here on the island pretty much my whole life and I’ve never seen this.”

So many dolphins in that particular area is rare, said Professor Andrew Trites, director of the Marine Mammal Research Unit at the University of British Columbia.

Although there are estimated to be one million Pacific white-sided dolphins, they are usually found in the open ocean.

Small numbers began to visit the Georgia Strait in the early 2000s, with about 100 to 200 eventually taking up residence in the Salish Sea, Trites said.

“We know they were here in the past,” Trites said.

Their remains have been found in First Nations middens going back 2,000 years, but they all but disappeared for 100 years, he added.

“So that’s a strange thing, like where did they go and what brought them back?”

Their return coincides with an increase in the number of seals, sea lions and transient killer whales that prey upon marine mammals.

Trites said one possible explanation was that through complex food web interactions, the increase in the number of seals may lead to more young herring for dolphins to feed on.

“Before this time, we had heavy culling of seals. There was whaling. We’ve come through a period of removing marine mammals and trying to control nature. And now, since they’ve been protected, I think the ecosystem is re-establishing itself and re-establishing a natural balance which is healthier overall.”

"These dolphins are here because the balance in the waters is off,” said Tom Sewid, a commercial fisherman from Kwakwaka’wakw First Nation. He said the dolphins are “an invasive species” driven into new waters by driftnet fleets.

As for the increasing number of seals and sea lions over the past fifty years, Sewid said it was another example of how the ocean is out of balance.

Sewid is the president of Pacific Balance Marine Management, an organization seeking to protect salmon and other fin fish stocks from being “eaten into extinction," by redeveloping a First Nations-led commercial seal and sea lion harvest.

He said a series of fisheries ministers had "basically ignored" their requests.

"I said, ‘Come hell or high water, coastal First Nations and river First Nations of British Columbia, we will get a licence to sell our seal and sea lion products,’” he said. He said he would take the issue to the courts if necessary.

In the past three years, Pacific Balance Marine Management has provided gift cards to First Nations harvesters to purchase bullets.

Sewid estimated that thousands of seals have been removed for food, social and ceremonial purposes from rivers, lakes and estuaries. He said salmon numbers were increasing in some systems as a result.

Stomach samples were being taken for research purposes, and meat and blubber testing for toxins.