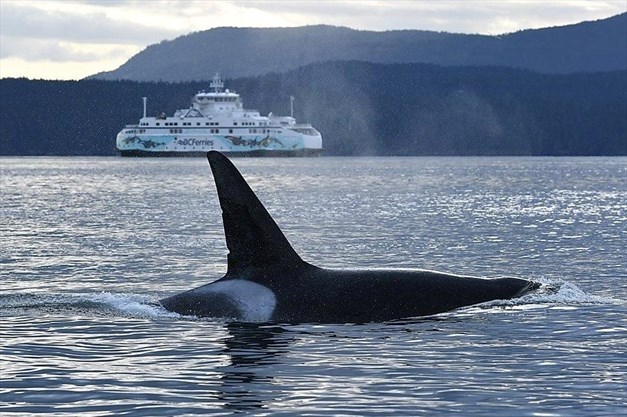 CN - Coronavirus means endangered orcas are experiencing a quieter ocean for the first time. Here's what that sounds like

VANCOUVER, CN —The waters off the coast of British Columbia are quiet these days. So quiet, the whales don’t have to shout to be heard over the loud hum of noise we humans make with our boats.

Due to coronavirus restrictions, yachts have been anchored at marinas, BC Ferries says trips are down by 80 per cent and whale watching businesses have closed.

It’s a rare opportunity that has scientists scrambling. For decades, they’ve asserted that a quieter ocean could help take the Salish Sea’s southern resident killer whales off the endangered species list. But they lacked enough data to quantify this theory — until now.

The Salish Sea off Canada’s West Coast is an inland sea dotted with islands that cargo ships must navigate in order to dock at the busy ports near Vancouver and Seattle. The Salish Sea is also home to the iconic orcas — and normally, it’s an incredibly noisy home.

Here, the low rumble of the ocean liners is constant.

And motors from smaller vessels punctuate the soundscape as they whiz by.

Underwater, sounds travel incredibly well. Some baleen whales can call to each other from as far as tens of thousands of kilometres apart. But orcas communicate in closer quarters and at a higher register — around the same register as the sound small boats make.

“When we put that kind of noise into their environment, it can really impact the ability of these whales to effectively communicate with each other, and to detect the fish,” said Lauren McWhinnie, a marine biologist and coastal geographer who has been studying the effect of vessel noise on orcas for the past five years at the University of Victoria.

She compared it to trying to talk to a friend at a noisy pub. It’s difficult to hear because everyone is talking at about the same register, said McWhinnie, who is currently an assistant professor at Heriot-Watt University in Edinburgh, Scotland.

“We know from studies the whales have adapted over time to increase the energy in their calls, and they change the type of calls they are using,” she said. “The theory is they’re trying to talk over that background noise level.”