International
Rhopilema esculentum (also known as flame jellyfish) is regarded as a delicacy in Asia. Credit: The Chinese University of Hong Kong (CUHK) 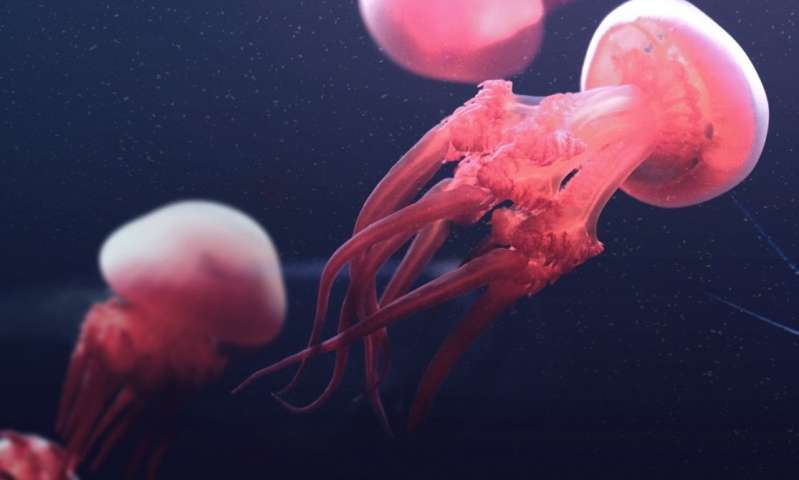 A research team led by Professor Jerome Hui Ho Lam from the School of Life Sciences at The Chinese University of Hong Kong (CUHK) has decoded for the first time the high-quality genomes of two jellyfish commonly found in Asian waters, including the edible flame jellyfish. Further studies have revealed many unexpected biological findings, including the identification of hormones which are thought to be only contained in arthropods like insects. The findings, just published in Nature Communications, provide references for further studies on the evolution, ecological roles and population bloom of jellyfish.

Jellyfish are found in every major ocean in the world, from surface waters to the deep sea. They play an important role in the oceanic food chain. Several species of jellyfish have also been adopted as a food source in some Asian regions. However, factors like climate change and ocean eutrophication have promoted high frequencies in jellyfish bloom, which, in turn, are responsible for negative effects on human activities and the marine ecosystem. Jellyfish swarms sting thousands of swimmers, clog the cooling systems of power stations and damage fishing apparatus.

Jellyfish have many characteristics and shapes. Some of them glitter, some of them can be reborn, some can reproduce both asexually and sexually, and some of them do not have circular bells until adulthood. Very little is known about the factors that regulate their transformation.

To better understand their hidden biology, Prof. Hui and his team sequenced the genomes of two species of jellyfish found in Asian seawaters, including Hong Kong, the Amuska jellyfish Sanderia malayensis and the edible jellyfish Rhopilema esculentum, also known as the flame jellyfish, which is regarded as a delicacy in China and some Southeast Asian countries.