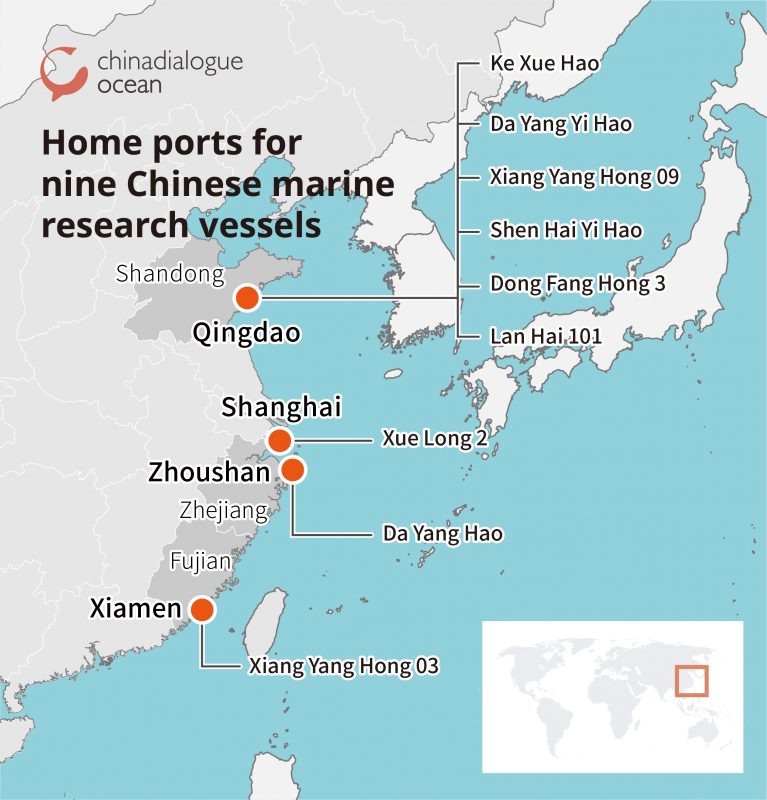 The changing make-up of China’s marine research fleet reflects the nation’s ambitions. Here, we take a look at nine of its ships.

In 2019, China’s new Xue Long 2 ice breaker – also known by its English name, the Snow Dragon 2 – made its first trip to Antarctica. This August, the vessel joined an international research team in the Arctic, highlighting China’s growing involvement in far-off waters.

With everyone’s attention on the Xue Long 2, few have perhaps noticed the delivery of several other new marine research vessels. These include China’s most advanced vessel for fisheries research, the Lan Hai 101 (Blue Seas 101), and for deep-sea mineral prospecting, the Da Yang Hao (Ocean). Also new on the seas is the Dong Fang Hong 3 (East is Red 3), the world’s largest “silent” research vessel. These new additions to the Chinese fleet will replace older ships soon to be retired, and open up new frontiers in marine research.

Chinese marine research got off to a later start than that of other seafaring nations. It was only in the 1950s that fishing vessels and tugboats were repurposed for marine research, and the first step was to explore China’s own waters. At the same time, the US was sending a manned submersible to depths of seven kilometres.

China’s first ocean survey fleet was made up of only the Xiang Yang Hong (Facing the Red Sun) series of research and naval vessels. Today, China has almost 60 marine research vessels in use. These include the Xue Long icebreakers and the Xiang Yang Hong, Da Yang, Ke Xue (Science) and Dong Fang Hong series of general research vessels. Many have been designed and built in the last decade.

China’s growing presence comes as inshore fisheries are increasingly depleted and technological advances are making it easier to exploit distant waters as well as the riches of the deep sea. Indeed, the high seas – those areas of our oceans beyond national jurisdictions – have become a new hot spot in the struggle to gain influence and control over resources.