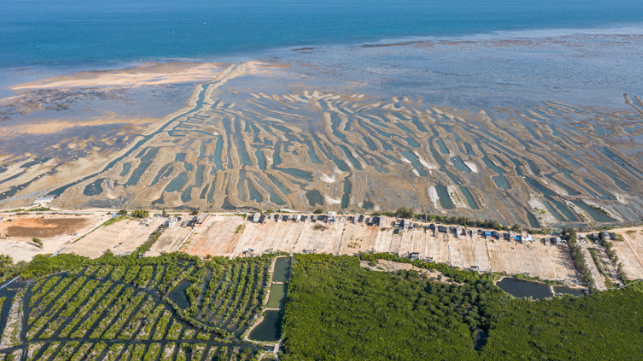 China - China Begins to Crack Down on Damaging Aquaculture Farms

Efforts to restore a protected wetland area in Hainan previously damaged by aquaculture could provide lessons in sustainable development for the rest of China.

The Huiwen wetlands stretch nine miles along the northeast coast of Hainan, from Bamen bay next to the city of Wenchang down to Fengjia bay. (The name, used locally, comes from the nearby town of Huiwen.) Varying in width from one half to two and a half miles, the wetlands include large areas of tidal flats and mangrove swamp, which are protected at the provincial level by the Qinglan Mangrove Reserve. They are rich in biodiversity, home to several species of mangrove and over 340 types of mangrove mollusc. And over the winter, they host huge flocks of migratory birds, including endangered species such as Nordmann’s greenshank.

For years, the Qinglan reserve was also home to numerous aquaculture farms, mainly growing a species of sea snail called Babylonia lutosa. But in June this year, all 84 of the farms were removed for falling foul of China’s “ecological redline” rules against aquaculture in natural reserves.

The management of Huiwen’s environment has been a focus since 2017, when the Central Supervision Office of Ecological and Environmental Protection criticized the unregulated development of aquaculture in Hainan. The farms within the Qinglan Mangrove Reserve were specifically mentioned for damaging “shelterbelts” that protect against coastal erosion and storm surges. The following year, the Hainan Department of Agriculture’s plan for shallow waters and tidal flats gave new urgency to bringing aquaculture and effluent management up to government standards. This will be supported by the 14th Five Year Plan for the marine environment – due to be released later this year – of which the Ministry of Ecology and Environment’s “Beautiful Bays” campaign is a key part.

Standards are particularly high for the stretch of tropical coast where the Qinglan Mangrove Reserve lies, as Hainan is a demonstration province for China’s “blue ecological civilization”. Beyond simply removing fish and snail ponds to restore the wetlands, the local government is also keen to find a new balance between conservation and aquaculture. The farmers will be relocated to plots in designated areas or new “aquacultural buildings” where wastewater is handled centrally. Elsewhere, artificial wetlands are being created to filter effluent from the farms.
Babylonia lutosa sea snail in a new aquaculture park in Huiwen

As well as mangrove swamps, the Huiwen wetlands also boast coral reefs and seagrass meadows. This variety of coastal ecologies makes Huiwen rare, with some describing it as a “textbook tropical coast”. In 2016, it was designated one of the “10 coastal wetlands most worthy of attention” by the Chinese Academy of Sciences’ Institute of Geographic Sciences and Natural Resources Research, as well as by other bodies.
shellfish in Qinglan Mangrove Reserve

But this coastline also suits aquaculture, which needs clean water and stable temperatures. The Hainan Aquaculture Institute built the town of Huiwen’s first aquaculture farm back in 1989, producing shrimp larvae. That prompted other similar operations to start up within the town’s administrative area (which covers about half of the Huiwen wetlands), and it soon became famous for shrimp breeding. At one point, the monetary value of shrimp larvae bred in the town accounted for 30% of China’s total.

Huiwen town’s aquaculture farmers typically use most of their land to build ponds. The roofs help shade the animals inside from the tropical sun. (Image: Sun Nuo / China Dialogue Ocean)