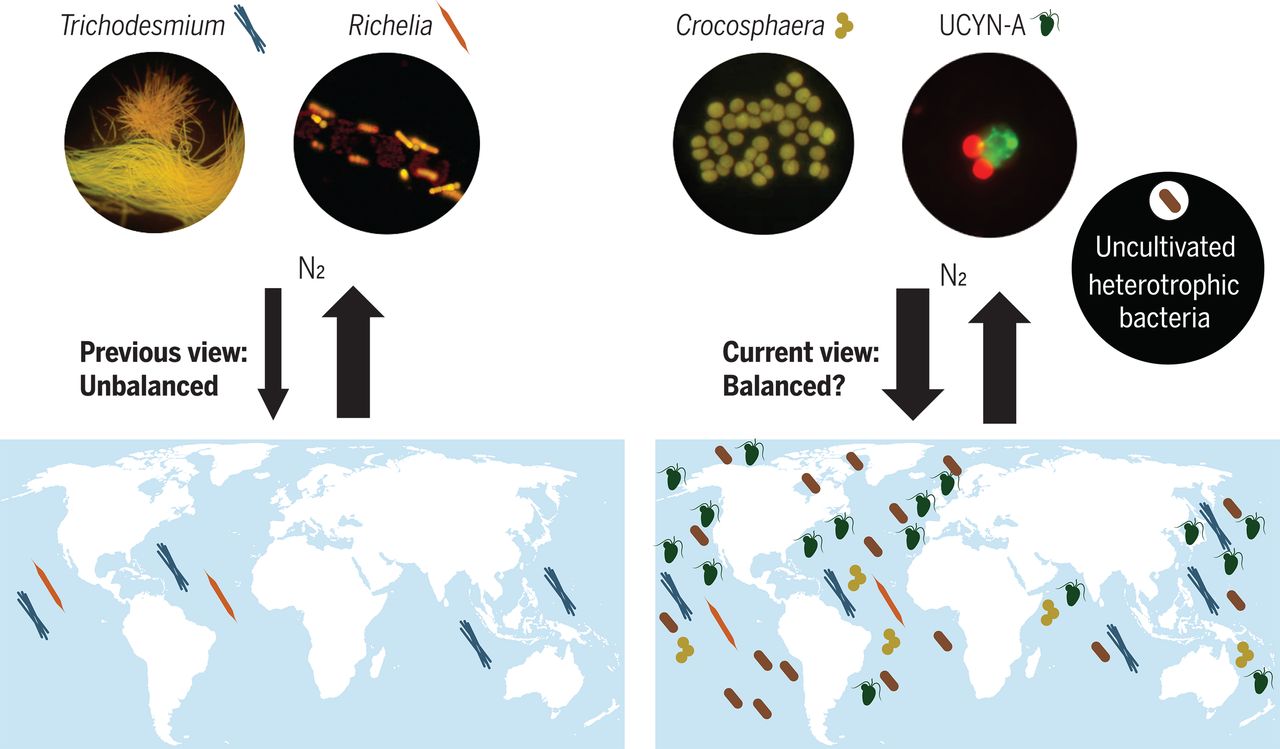 As a component of many biomolecules, nitrogen is a crucial element for life, especially in nutrient-poor environs such as the open ocean. Atmospheric dinitrogen gas (N2) is abundant but must be fixed by reduction to ammonia, a process limited to certain organisms and environments. Zehr and Capone review changes in our understanding of what marine microorganisms are fixing N2, where they live, and what environmental features influence their activity. N2 fixation is more widely distributed than previously thought, and we still have much to learn about the physiology and regulation involved. We now have better estimates of global- and basin-scale inputs and outputs, but questions remain as to whether the oceanic N cycle is balanced. New tools are enabling better understanding of ocean N2 fixation despite disruptive consequences from human activities, including ocean acidification and warming.

Biological dinitrogen (N2) fixation, the reduction of atmospheric N2 to ammonia, is important for maintaining the fertility of the oceans by providing biologically useful nitrogen to support primary organic matter production (i.e., carbon dioxide fixation). N2 fixation offsets the removal of combined nitrogen by microbial denitrification and anaerobic ammonium oxidation (anammox) and export to the deep sea. For several decades, there has been a lack of consensus as to whether losses of N through microbial removal pathways are balanced by biological nitrogen fixation, along with other inputs such as atmospheric nitrogen deposition and terrestrial runoff. N2 fixation was also generally thought to be largely attributable to only two types of cyanobacteria—the free-living filamentous colony-forming Trichodesmium and the symbionts of diatoms, Richelia—both of which were found primarily in tropical and subtropical surface waters. Very little was known about when and where N2 fixation occurred, or whether there were more N2-fixing species not yet identified. Nor did we know much about the genetic capabilities and adaptations of the marine N2 fixers and how they acquired other nutrients required for their growth. Hypotheses based on biogeochemical models predicted that regional sites of N losses were linked to N2 fixation, suggesting a mechanism that could maintain the balance of the global ocean N budget. Understanding the balance of the N cycle in the sea has wide-ranging implications for past, current, and future foodwebs, as well as for the role of marine N2 fixation in the sequestration of atmospheric CO2 and the production and consumption of other greenhouse gases such as nitrous oxide. With intensive research over the past several decades, many of these earlier suppositions have been displaced and supplanted by new models as our knowledge of the players and processes has greatly increased. Nonetheless, many new questions have arisen and old ones remain to be fully solved.

Research on marine N2 fixation has been aided by the development of new technical and modeling approaches, including genomic and metagenomic analysis of natural populations, isotope geochemistry, and satellite remote sensing. Global surveys using high-throughput nucleic acid sequencing have uncovered novel organisms and provided new information about the diversity, global distribution, and phylogenetic affiliations of N2-fixing microorganisms (also referred to as diazotrophs). The known diversity of potential N2-fixing marine microorganisms has thus greatly expanded and now includes a free-living unicellular cyanobacterium (Crocosphaera), a group of novel unicellular cyanobacteria (UCYN-A) symbiotic with a unicellular alga, and many lineages of heterotrophic or photoheterotrophic bacteria. The cyanobacterial symbiosis is important in oceanic N2 fixation and is characterized by genome reduction and coevolution between cyanobacteria and their eukaryotic hosts. Heterotrophic marine diazotrophs are diverse but have not yet been definitively shown to fix N2 or to contribute substantially to water column N2 fixation. Benthic habitats and associations of diazotrophs with macroorganisms have also been identified. Large-scale biogeochemical controls (primarily the inputs and availability of phosphorus and iron) and physical controls on N2 fixation are beginning to be more fully understood, including how they vary across ocean basins. The local and global contributions of individual species are still not fully understood and remain difficult to assess, which presents important research challenges for the future. Observations and new assessments suggest that N2 fixation and N removal through denitrification (canonical and anammox) may be in approximate balance, although the stabilizing feedbacks, such as the extent to which input and removal processes are linked in space and time, are still debated.

There are likely to be yet more discoveries of novel organisms and a refined view of where and when N2 fixation occurs and is controlled, leading to a greatly improved predictive capability for global N2 fixation. Distributions of N2-fixing microorganisms and N2 fixation are expected to respond to chemical and physical alterations resulting from global climate change. Marine N2 fixers could contribute to the rapidly developing field of marine aquaculture and biotechnology. They have also been suggested as possible targets for upper-ocean fertilization to promote sequestration of atmospheric carbon.