Caribbean
In its 2020 climate commitment under the Paris Agreement, Belize pledged to help safeguard the vital ecosystems, biodiversity, and climate benefits that coastal habitats provide, including mangroves such as those above. Shutterstock 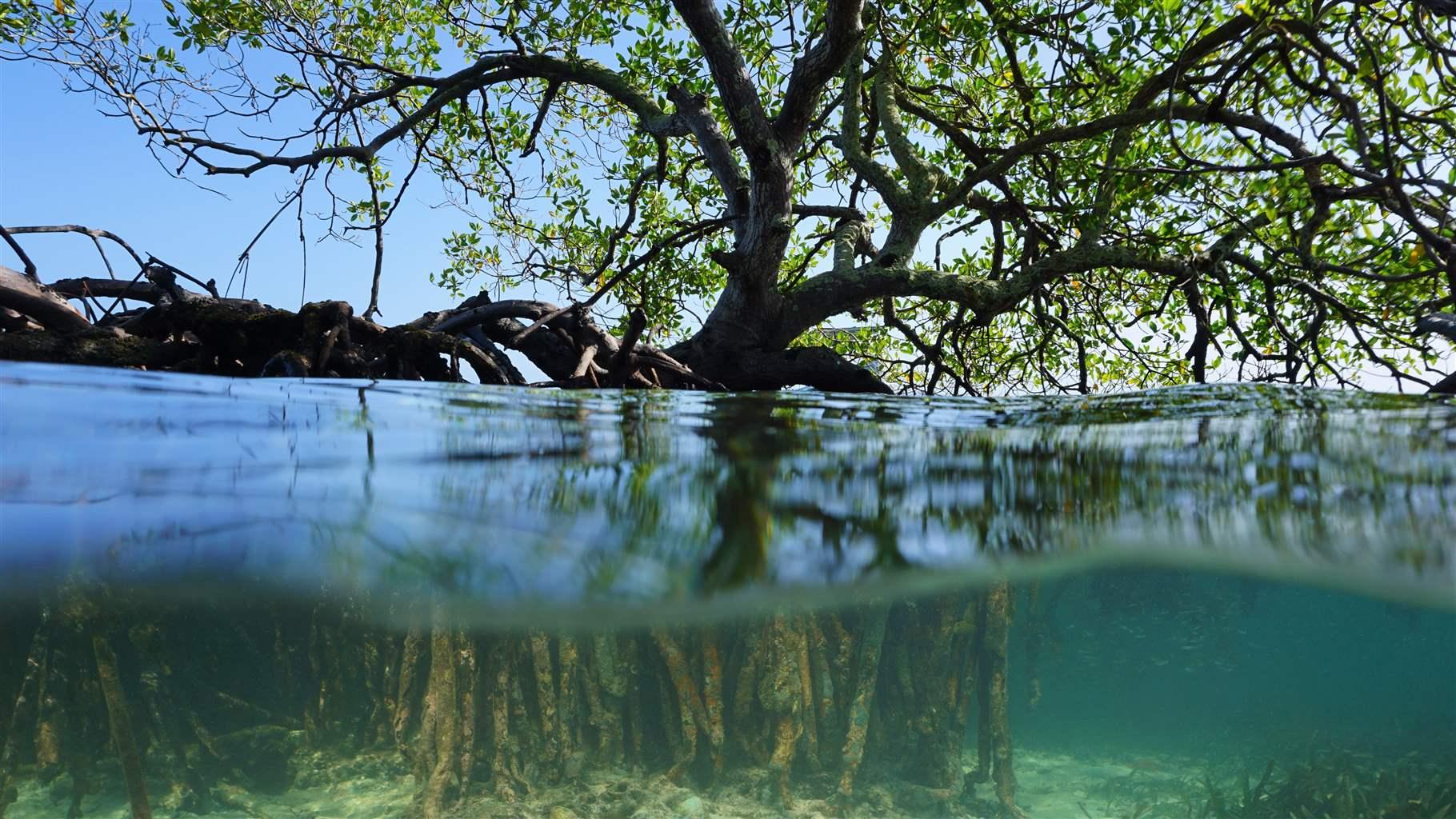 Latin American and Caribbean governments should look to protect and restore their mangroves, salt marshes, and seagrasses to help fight climate change. This was among the major themes that emerged from Latin America and the Caribbean Climate Week (LACCW), held July 18-22 in Santa Domingo, Dominican Republic.

Science has shown that those coastal wetland habitats—in Latin America, the Caribbean, and elsewhere—sequester and store carbon at impressive rates. Coastal wetlands also convey climate adaptation benefits, such as protecting communities from flooding, acting as a buffer against storm surge, reducing land loss from erosion, and sustaining livelihoods such as fishing and tourism.

The goal of LACCW was for governments and other stakeholders to strengthen and solidify global responses to climate change, including by exploring ways to become more climate resilient, lower greenhouse gas emissions, and develop partnerships to address climate change. This event was the first in-person regional climate week in more than two years.

During a panel discussion hosted by The Pew Charitable Trusts and NDC Partnership, representatives of Belize, the Dominican Republic, and the Caribbean Community Climate Change Centre (5Cs)—a regional government-formed institution—shared key learnings from the development and implementation of targets for coastal wetlands as nature-based solutions within national climate strategies.

In its most recent nationally determined contribution (NDC) to the Paris Agreement, Belize committed to a set of ambitious targets that would protect and restore the country’s coastal wetlands. Kenrick Williams, CEO of Belize’s Ministry of Sustainable Development, Climate Change, and Disaster Risk Management, emphasized his country’s commitment to the environment, and in particular its coastal wetlands. Belize was very active at LACCW and appears eager to implement its NDC, including by accounting for the carbon sequestration and storage capacity of its extensive mangroves in its greenhouse gas inventory.

During his opening remarks at LACCW, the Dominican Republic’s vice minister for coastal and marine resources, José Ramón Reyes, highlighted some of the initiatives underway in his country, including one included in the 2020 NDC to develop a fund for wetlands restoration and recovery. That has already resulted in the planting of 67,000 mangroves.

Based on the panel discussions and other exchanges at LACCW, there seems to be a growing interest in the region to restore and protect these blue carbon ecosystems—encouraging progress that Pew hopes will lead to similar commitments and action by countries around the world.

LACCW is one of a series of regional climate weeks that resulted from an agreement last November at the United Nations Framework Convention on Climate Change Conference of the Parties in Glasgow. The next one, Africa Climate Week (ACW), is slated for Aug. 29 to Sept. 2 in Libreville, Gabon. Pew encourages participants at ACW to also advance initiatives on protecting and restoring coastal wetland ecosystems—momentum that could carry over to the next U.N. Conference of the Parties this November in Sharm el-Sheikh, Egypt.