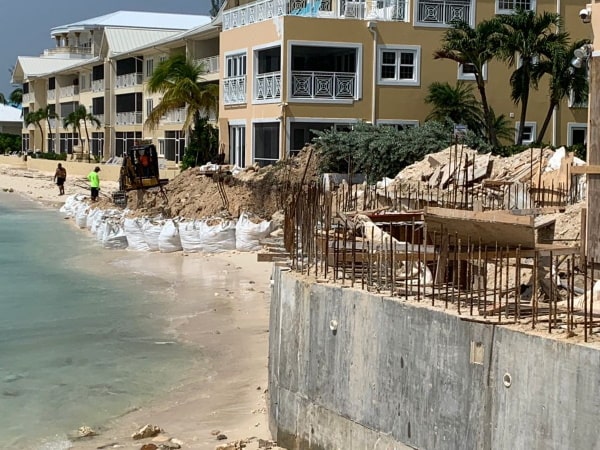 (CNS): The sea wall project at Regal Beach Club condos on Seven Mile Beach, which has been causing a stir on social media as construction materials continue to fall into the sea, is an example of how efforts to address the beach erosion on Cayman’s famous but now dwindling stretch of beach can make things worse.

The project to build a sea wall to protect the property is only part way through but the wall is already in the ocean.

This not only illustrates the futility of the effort but also how much further the beach has eroded since the owners were granted planning permission for the wall. The Department of Environment said that the project is problematic but there are no mitigating measures that can be deployed.

A spokesperson from the department told CNS this week that they have advised the developer to get the project completed as quickly as possible now because the process is contaminating the marine environment as aggregate and construction materials are constantly washing into the ocean.

The DoE’s recommendation not to grant planning permission for this wall was ignored by the Central Planning Authority. Now there is no advice to offer the developers to lessen the adverse impacts and there is nothing that can be done except to expedite the project to reduce the amount of debris getting into the water.

The condo complex is one of a number of properties stretching from Ken Dart’s private family residence to the Grand Cayman Marriott Beach Resort that are now suffering the direct consequences of building concrete structures too close to the water’s edge, on a dynamic beach, in the face of rising sea levels.

The owners at Regal Beach secured planning permission last year but the project did not need a coastal works licence as the work was, at the time, still intended to be within the property footprint and under the jurisdiction of the planning department. However, due to the erosion, the sea is already lapping at the wall, which is still under construction.