Caribbean
Workers remove Sargassum seaweed from the beach near Tulum in Quintana Roo State, Mexico, on May 24, 2019. (DANIEL SLIM/Getty) 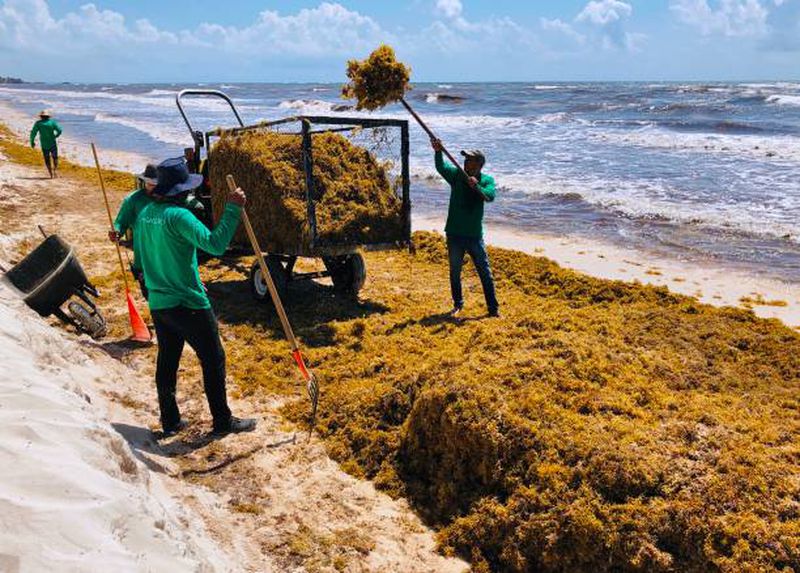 The Mexican tourist industry depends on healthy and functioning coastal marine ecosystems. Management priorities should focus on minimizing coastal impact from Sargassum stranding and smothering. Academic institutions, stakeholders, NGOs and local municipalities should work together to mitigate these impacts.

• Three bays in Quintana Roo, Mexico were chosen to determine the environmental stress caused by Sargassum on benthic communities, and the seagrass, Thalassia testudinum.

• Two control sites, Yal Ku Lagoon and Half Moon Bay, benthic communities and the physico chemical characteristics of the waters were not impacted.

• Soliman Bay had Sargassum mats, and under those mats light and dissolved oxygen levels were significantly lower.

• Under the Sargassum mats light and dissolved oxygen levels were significantly lower.

• The stress caused by Sargassum mats in Soliman Bay cause a seven-fold decrease in productivity of seagrass compared to other sites.

Sargassum mats in Mexican bays reduce the biodiversity of coral and seagrass nursery habitats. Three bays in Quintana Roo, Mexico were chosen to determine the environmental stress caused by Sargassum natans and S. fluitans on coral, seagrass and fish populations. For both control sites, Yal Ku Lagoon and Half Moon Bay with little to zero Sargassum cover, benthic communities and the physico chemical characteristics of the waters were not impacted. In Soliman Bay, Sargassum mats cover large areas in the shallows and shore and smother the seagrass and corals. Under the Sargassum mats light and dissolved oxygen levels were significantly lower. Anoxic conditions were found, with levels as low as 0.5 mg/L for oxygen and a 73% decrease in light. Water temperature was 5.2 ± 0.1 °C (mean ± SE) warmer under the Sargassum mats. By determination of weight (grams per day) and growth (mm per day), the stress caused by Sargassummats in Soliman Bay caused a seven-fold decrease in productivity of T. testudinumcompared to other sites. Taxonomic diversity was also reduced with lower biomass and an altered species distribution. To improve these ecosystems, pre-emptive conservation management and protection must be priority for future ecosystem health and biodiversity.

The Sargasso Sea is formed by large amounts of Sargassum natans and S. fluitansand has always been considered as the source of the golden tides of pelagic Sargassum washing up on most Caribbean coastlines. Sargassum sequesters 40 to 260 million tonnes of CO2 per year [33]. Sixty million tonnes of that net primary production per year sinks to the deep ocean [33]. This represents 7% of the oceans’ global net transport of CO2 [33], enhancing uptake of atmospheric CO2and ocean carbon sinks [70]. In addition to significant carbon uptake, Sargassumprovides habitats for spawning, nursery and feeding grounds [32]. Similar functions are found in mangrove forests [21], seagrass [6] and corals [7].

Since 2015, large mats of S. natans and S. fluitans smother Caribbean coastlines of Mexico. The smothering began after the formation of the Small Sargasso Sea in 2011 off the Brazilian coast [20,61]. Several hypotheses have been put forward regarding the conditions that lead to the creation of the Small Sargasso. Global climate change might have forced part of the Sargasso Sea to move further south (Small Sargasso), bringing the Sargassum spp. closer to the Caribbean Sea (review from [36]). The changes in the distribution of the Sargassum is thought to be caused by a regime shift in changing ocean currents [61,69], increasing seawater temperatures and abnormal winds, brought about by climate change [13,28,36]. Sanchez-Rubio et al. [59] mapped long term distributional patterns of Sargassumand found that the changing climate altered the Atlantic Multidecadal Oscillation (AMO). The AMO is the variability in the North Atlantic sea surface temperatures over many decades. This led to higher occurrences of Sargassumunder warmer AMO events due to a changing global climate [59].

Over the last few decades, the volume of Sargassum, forming large mats and washed up along the coastline has been steadily increasing. The Sargassum mats arrive in Mexican shallow bays and remain for several months each year. The mats degrade on beaches, at average volumes of 23603 km−1 [56], creating toxic leachate. These impacts reduce oxygen availability [9] and cause high levels of hydrogen sulfide, H2S [57] exacerbating devastation to the ecology, environment, and economy [5], [36], [57] of the site. Earlier studies have shown how seagrass and coral ecosystems in particular are the most affected by the Sargassum mats [5,66]. In Mexico, the health of seagrass and coral reef ecosystems play a crucial role to coastal tourism [19,39,55], which in Quintana Roo alone, it is worth $10 billion per year [54]

In Mexico, seagrass meadows cover an area of 400,000 ha of coastal waters and the standing stock of stored carbon biomass in seagrass is estimated at 48 million tonnes [24]. This biomass supports fish populations and higher organisms in adjacent ecosystems [16]. Each year global seagrass loss continues at rates estimated at 7% [71]. Losses are due to poor water quality from reduced UV light and dissolved oxygen (DO2) levels [49], similar to the environment caused by Sargassum mats and leachate. Coral reefs are also under threat from the smothering Sargassum mats and runoff from the degrading mats, which form a toxic leachate, visible as dark brown in the water [9]. The impacts on coral reefs and losses of hard coral cover cause declines in biodiversity, due to loss of habitat complexity and connectivity [12,18,41]. Losses of hard coral cover are often followed by an overgrowth of macroalgae, leading to an unstable state phase-shift [26]. The impacts from smothering mats of Sargassum and toxic leachate will lead to reductions in ecosystem resilience and loss of function [9,58,64], due to declines of seagrass productivity and hard coral cover.

Northwest of the Small Sargasso Sea we investigated the impact of Sargassummats and its leachate on the seagrass, corals, and fish distribution in Soliman Bay, 10 km north of Tulum, Quintana Roo, Mexico. We also compared primary production rates of the seagrass, Thalassia testudinum and water quality in Soliman Bay against sites without impact from Sargassum, Yal Ku lagoon and Half Moon Bay, which had little to zero smothering from Sargassum (Fig. 1). Before Sargassum smothering occurred in Soliman Bay, seagrass and coral communities were healthy (D. Graham pers comm). We hypothesised that, (1) benthic community structure will have a greater diversity and abundance in areas without Sargassum mats compared to areas smothered by mats in Soliman Bay, (2) Sargassum mats and its leachate will reduce light intensity and dissolved oxygen levels, while increasing water temperature, and (3) T. testudinum growth rates and mass gain will be greater in sites without Sargassum mats.

2.1. Sites used in the investigation

Three coastal shallow-water bays in Quintana Roo, Mexico were investigated between June and August 2018. Site selection was determined by the presence of coral, seagrass, and different levels of Sargassum cover (see Table 1 for environmental variables). Yal Ku lagoon and Half Moon Bay were control sites. In Half Moon Bay, some areas of the strandline had beach-cast Sargassum but high wave energy improved mixing of oxygen-rich water. Yal Ku lagoon (Fig. 1, 20.4095° N, 87.3055° W) has a 200 m-wide opening to the ocean, allowing the exchange of water between the ocean and the lagoon. The lagoon has benthic species including seagrass, Halodule wrightii and T. testudinum, and corals, Siderastrea siderea and Agaricia spp. Sargassum was not found in the Yal Ku lagoon. Half Moon Bay (Fig. 1, 20.3960° N, 87.3159° W) close to and South of Yal Ku lagoon is on the coast with a bay perimeter of 1.2 km.