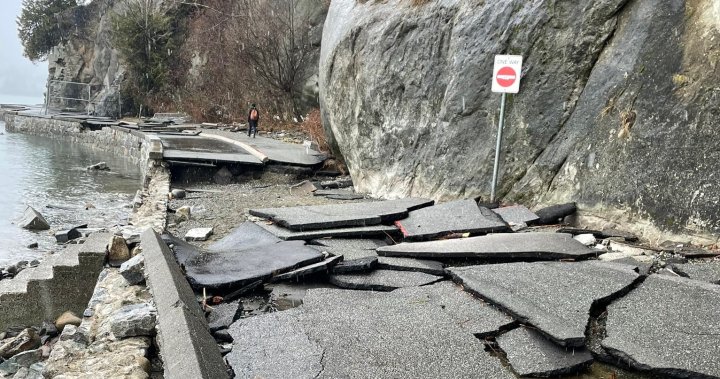 The future of Vancouver’s beloved seawall remains up in the air, says one municipal official, as crews continue to assess the damage from last week’s storm.

“Our focus right now is removing a lot of the debris, the big rocks, the coping stones from the wall, the logs,” said Ian Stewart, manager of park development with the Vancouver Park Board.

“What happens is those objects sort of roll around in the waves and cause further damage.”

The Third Beach area and the stretch of seawall between the Teahouse Restaurant and Siwash Rock bore the brunt of the storm, with pavement that was buckled or outright washed away in some sections of the seaside path.

City engineers and consultants have been in Stanley Park daily, conducting drone photography and a rapid damage assessment, but it will be “some time” before a cost estimate is released or a reopening date is announced.

“This is damage of a different order than we’ve seen,” Stewart explained. “What we need to do is work with our community partners, work with the First Nations and our community consultants to determine what we do.

“We’re all asking ourselves, ‘How do we build this back and what is the right way to do that with increasing frequency of these types of severe storms and higher sea levels?'”