Pacific Northwest
During one of their free-floating larval forms, sea lice attach to salmon, devouring their skin and sucking blood. In the Pacific waters, two species of sea lice are found—Caligus clemensi and Lepeophtheirus salmonis. Studies have shown that L. salmonis is abundant in pink salmon around salmon farms. Image credits by Sea Lice Research Centre. 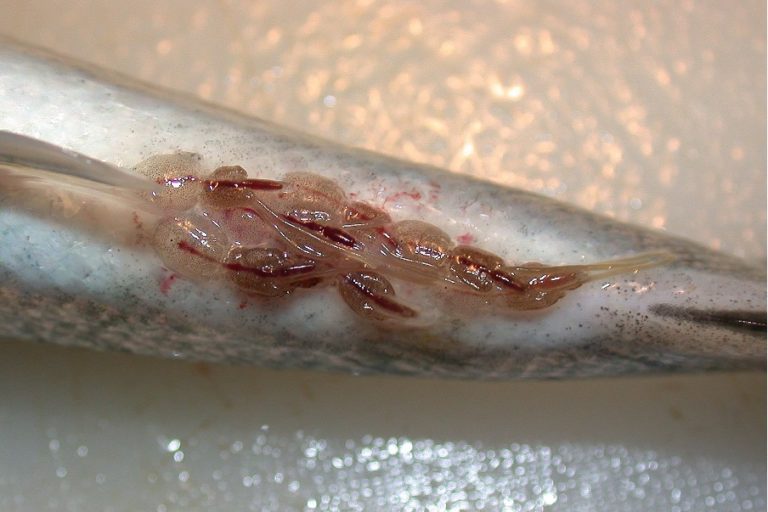 CAN - As sea lice feast away on dwindling salmon, First Nations decide the fate of salmon farms

VANCOUVER, Canada — Alongside the millions of Atlantic Salmon clustered in the open net pens that dot the waterways around Broughton Archipelago’s over 200 islands, sea lice, a tadpole-shaped parasite, feast on the fish.

In the zeal to establish a salmon market northwest of Vancouver, Canada, many aquaculture companies set up open net pens—cage-like structures where a layer of fishnet separates the farmed salmon from those in the wild—in the 1980s. They were also, however, creating conducive conditions for the spread of sea lice, a blood-sucking parasite found on the aquatic animal.

By the early 2000s, communities living in the archipelago began noticing wild juvenile pink salmon—native fish of the Pacific Ocean that aren’t gathered in the pens—returning from their freshwater spawning grounds also infested with the lice. These fish were on their way to the ocean, swimming near the salmon farms and through the meandering inlets—a path they have taken for millennia for this seasonal journey.

In 2002, the number of wild pink salmon (Oncorhynchus gorbuscha) that came to the rivers and creeks on Broughton Archipelago to spawn crashed from over three million fish in 2000 and 2001 to a measly 147,000—an unprecedented decline that natural variations in salmon populations could not explain.

“Open net pen salmon farms in Broughton became a cause of concern,” says marine biologist Andrew Bateman from the Pacific Salmon Foundation. “Similar farms in the Atlantic have been associated with the spread of sea lice, causing a decline in wild populations in Norwegian waters.”

Concerned about the future of the Pacific salmon—an economically, ecologically, and culturally vital fish in the region—the Mamalilikulla, ‘Namgis and Kwikwasut’inuxw Haxwa’mis First Nations began their decades-long struggle to get rid of salmon farms from wild salmon migratory routes. The farm closures, the Indigenous leadership hopes, can protect the wild salmon and help the province move towards sustainable aquaculture.

‍
In 2018, the three nations signed a government-to-government agreement with the provincial government of British Columbia, to create a transition plan for 17 fish farms operated by MOWI Canada West (formerly Marine Harvest Canada) and Cermaq Canada, from the Broughton area between 2019 and 2023.

A First Nations-led monitoring and inspection program has been set up to oversee the fish farm operations and monitor sea lice infestations in the farms during the transition process. The nations are relying on scientific evidence and Indigenous knowledge to guide them in their decisions on whether a farm can stay, must go or can be transitioned to a sustainable aquaculture model.

In the last three years, ten farms have been decommissioned and the future of seven farms are to be decided by 2023.