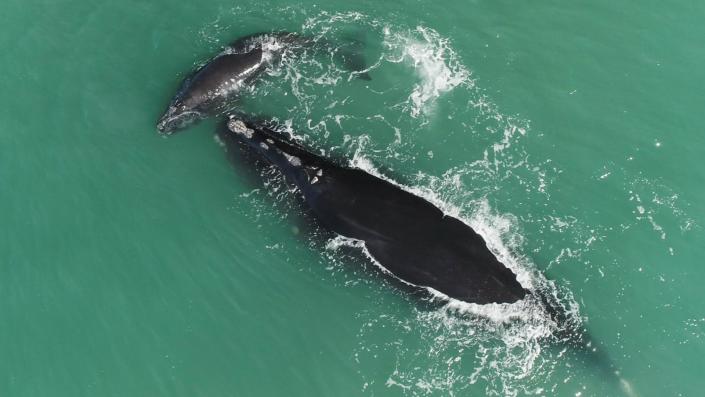 CAN - 'The Last of the Right Whales': Intimate film about whales on the verge of extinction

While North Atlantic right whales have roamed our oceans for nearly 20 million years, these gentle giants could be extinct within 20 years.

Nadine Pequeneza's film The Last of the Right Whales (streaming on CBC Gem) provides an unprecedented look at the migration of these whales from their calving ground off the coast of Florida to a new feeding area in the Gulf of St. Lawrence.

With less than 400 of these right whales remaining, dying at a rate of 24 per year, this documentary uses stunning cinematography to help us understand what's happening in our oceans, and the impacts on these incredible, but rarely seen animals.

"The whales impacted by the UME include dead, injured, and sick individuals, who represent more than 20 per cent of the population, which is a significant impact on an endangered species where deaths are outpacing births," information from the National Oceanic and Atmospheric Administration (NOAAA) reads. "Additionally, research demonstrates that only about 1/3 of right whale deaths are documented."

It's that warning from 2017 that caught the filmmaker's attention.

“I was watching the headlines, like everybody else, and initially the news was reporting that the whales were dying, but they weren't saying why,” Pequeneza explained. “So it was a bit of a mystery, at least for those of us who weren't familiar with the story of the North Atlantic right whale.”

“[I] start doing some research and you find out that humans have had a pretty negative impact on this species for centuries.”

Those human-related threats include ship strikes and fishing gear entanglement. Additionally, the effects of climate change have resulted in these whales searching the ocean for food in new areas, coming into contact with ships and fishing gear where they haven't previously been present.

Pequeneza also highlights that while making this film, three calves died by small recreational boats, stressing the importance of what it means to actually slow down in the ocean.