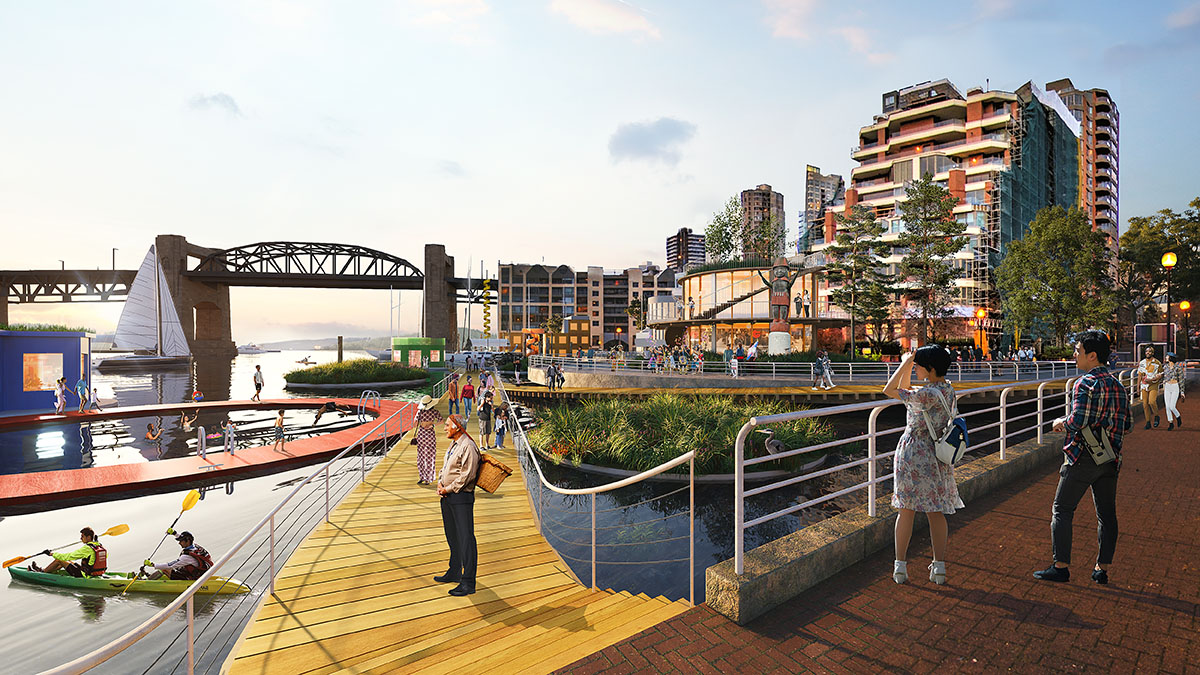 MVRDV, as part of a team named North Creek Collective, has created a "Sea Level Rise Catalogue", introducing a series of proposals for the City of Vancouver, aiming to adapt waterfront buildings, landscape and infrastructure to accommodate to rising sea levels.

The catalogue, addressing to the problems of sea level rises in multiple cities across the world from Miami to Manila, shows how cities can adapt to climate change by adapting its existing infrastructure and building typologies.

Developed in response to the Sea2City Design Challenge, the catalogue was meant to investigate the urban future of False Creek, a body of water in the heart of Vancouver, Canada.

In between bridges, current situation

In the end, MVRDV's project resulted in an extensive catalogue of options, including various kinds of adaptive buildings. "With it, the makers aim to inspire other coastal cities around the world to undertake immediate action to adapt to climate change," said MVRDV in its press release.

Sea level rise turns into a global challenge around the world in many cities. Since many thriving cities are located on the waterside, and so a climate-change-induced rise in sea level, combined with increases in storm surges, droughts, and land subsidence, this threatens cities globally.

According to MVRDV, typical developments to these challenges were including resisting the water with higher flood barriers and dikes.

"However, such approaches often worsen flooding in cities, limiting the natural ability of the foreshore to absorb wave energy, storm surge and run-off," said the studio.

"What if cities learned to work with water, rather than against it?," asked the firm.

Acting as a toolbox, MVRDV's proposals aim to make Vancouver a more resilient and inclusive city in the future.

As part of a team named the North Creek Collective, the firm has created a catalogue of possible solutions for adapting waterfront buildings and infrastructure to accommodate and absorb encroaching water.

"This Sea Level Rise Catalogue supplements their entry to the City of Vancouver’s Sea2City Design Challenge, which invited teams to investigate the urban future of False Creek, a body of water in the heart of Vancouver that is home to a number of the city’s major attractions," the firm continued.

"In tackling the next century of False Creek’s development, we looked closely at the context of Vancouver – considering everything from the types of building already found there, to the community values of the city and local First Nations, such as Musqueam, Squamish, and Tsleil-Waututh, for whom this is an important site," said MVRDV founding partner Nathalie de Vries.

"With our approach, we offer ideas that can also be adapted to new contexts elsewhere; with the Sea Level Rise Catalogue, Vancouver can become a global leader, showing other cities a way into the future."

"Sea level rise is a challenge that will impact cities globally, from Miami to Manila," she added.