International
Lobster Fishing Areas in the Maritimes Region. via Fisheries and Oceans Canada 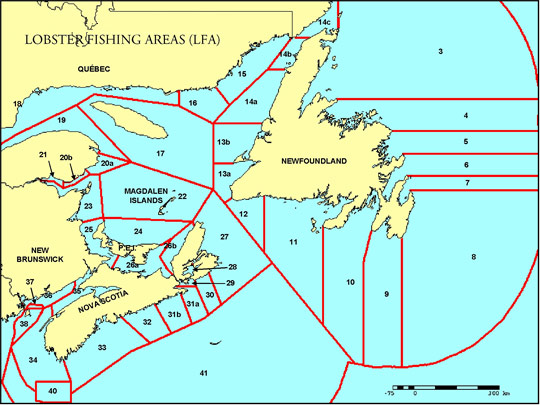 CAN - Lobster Fishery at a Crossroads

Part 2: Tensions over a moderate livelihood fishery are hiding a much bigger threat to the inshore

On October 1, hundreds of Mi’kmaq and their allies held a mawio’mi to celebrate Treaty Day on the wharf in Saulnierville on St. Mary’s Bay in Southwest Nova, where crews from Sipekne’katik First Nation were almost two weeks into their new “moderate livelihood” fishery, affirmed as their Treaty right by the 1999 Supreme Court of Canada Marshall decision.

Moments before the celebration began, Sipekne’katik Chief Sack spoke with the Halifax Examiner by telephone. He said that the First Nation fishers were now operating 10 boats off Saulnierville for their moderate livelihood fishery, up from the initial seven licences the band issued to its members. Each licence is for 50 traps, for a total of 500.

Sack said that the Sipekne’katik First Nation had another five boats available to them, but he didn’t know if or when they might also join in the moderate livelihood lobster fishing. 1

He said they would continue their moderate livelihood fishing right into the official commercial lobster fishing season in LFA 34, which runs from November 28 to May 31.

According to APTN News, the commercial fishery in that zone, which is much bigger than just St. Mary’s Bay, allows for up to 390,000 traps. The zone is Lobster Fishing Area (LFA) 34, where the commercial lobster fishery involves up to 985 fishing vessels and 375 or 400 traps per licensed vessel, depending on the time of year. 2

A very few of these are for First Nation communal commercial licences, including ones belonging to Sipekne’katik. As reported in Part 1 of this series, communal commercial licences are those issued by the Department of Fisheries and Oceans (DFO) to First Nations communities as part of the Marshall Response Initiative, which included a voluntary buy-back program from non-Indigenous licence-holders.