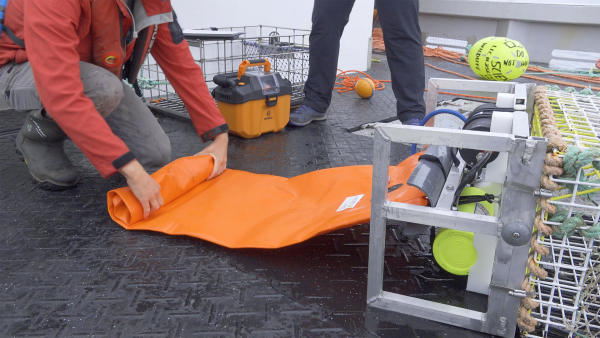 When fishing zones get closed down due to whale sightings, fish harvesters now have a new place to turn. Can Fish is a program set up by the Canadian Wildlife Federation to allow fishers to test out and use groundbreaking ropeless technology for free.

The North Atlantic right whale is one of many marine species being impacted by the changing ocean temperatures in a warming world. The whales have been swimming northward moving from the Bay of Fundy to the Gulf of St. Lawrence to hunt microscopic crustaceans called copepods over the past decade, according to a recent study.

Published in Oceanography, the findings suggest this northward shift is “driving collapse” of the whale population, as it has put them in the path of ropes and fishing gear that can cause entanglements and ultimately death.

The Canadian Wildlife federation is trying to lessen this risk by popularizing the use of ropeless fishing gear through its newly introduced Can Fish program.

At a warehouse in Halifax, Nova Scotia, fish harvesters can show up and borrow innovative ropeless fishing gear for free. The catch? These fishers need to provide data collected as they use the innovative technology in order to help build future designs of the equipment.

"Most fixed gear fisheries like lobster fishing have a buoy line that connects a buoy at the surface with a trap at the bottom," the Canadian Wildlife Federation’s Sean Brillant told The Weather Network.

"For those fish harvesters who are being affected by closures to protect whales, this is a very reasonable option. A solution to those closures that will allow them to keep fishing," Brilliant added.