International
Boats from the Sipekne’katik First Nation leave the Saulnierville wharf with lobster gear aboard after the seven moderate livelihood licences and tags were given out. Also outside of the mouth of the harbour were dozens of commercial lobster vessels from LFA 34 who are protesting out-of-season commercial sales of lobster. Tina Comeau / The Chronicle Herald 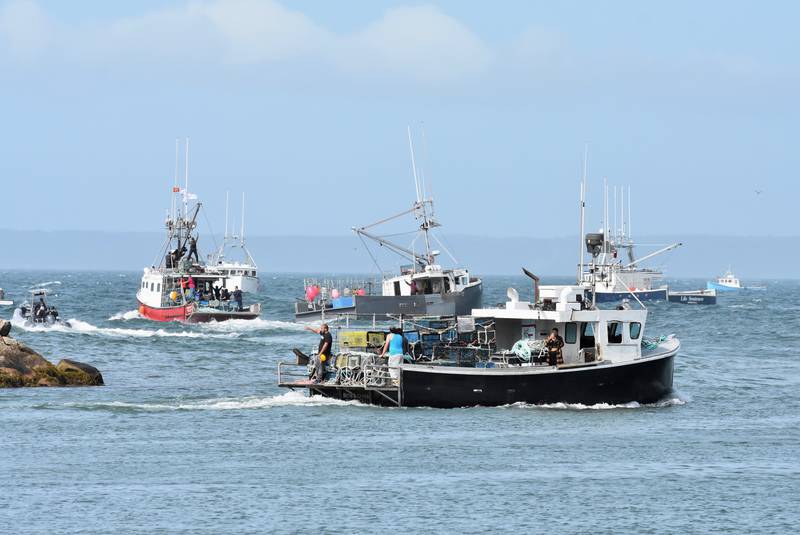 Commercial fishermen were taking to the water and wharves in protest saying they feel abandoned by DFO, which has not been doing its job to enforce what they say is illegal out-of-season fishing.

The Sipekne’katik First Nation Council says it is working with the RCMP to ensure the safety of its moderate livelihood fleet fishing in St. Mary’s Bay.

And late Friday afternoon the Assembly of Nova Scotia Mi’kmaw Chiefs declared a state of emergency for mainland Nova Scotia because of what it calls political unrest and violence.

“Our Government’s first priority is to ensure everyone involved remains safe. In Canada, anyone can participate in peaceful protests and that process is fundamental to our democracy,” she said. “At this time, it is imperative that all parties – and the public – work together to lower tensions on the water and in our communities, to foster understanding between one another, because through understanding we will create the space for constructive, respective dialogue to happen.”

“To that end, I’m extending an invitation for Indigenous leadership and industry leadership to meet with me as soon as possible. It is vitally important that we come together to find the best path forward to a peaceful resolution on the water,” said the minister. “Over the last several weeks, I have been on the phone speaking with many involved, listening to what they need and working to find a collaborative path forward. These conversations will continue.”

Jordan said the issues surrounding this fishery are longstanding, complex, and deeply personal to all involved.

“The goal is, and always has been, to further implement First Nations’ rights and have everyone participate in a constructive and productive fishery, for the benefit of all communities in Nova Scotia,” she said.