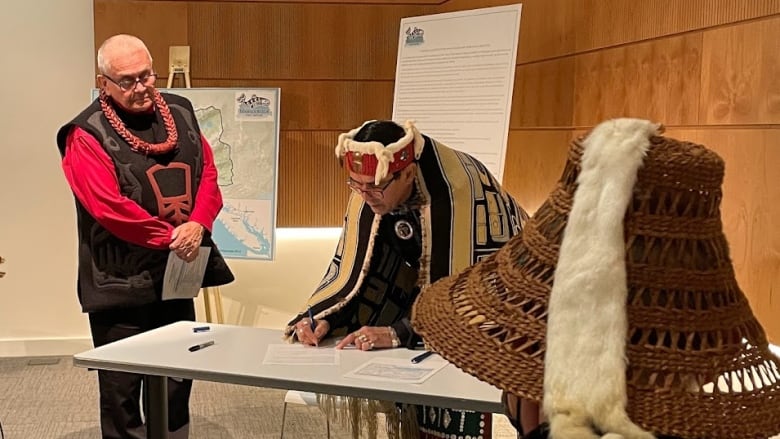 Emaciated bears and dwindling salmon stocks have prompted the Mamalilikulla First Nation to push forward with a conservation plan to protect part of its traditional territory.

It has declared an Indigenous Protected and Conserved Area (IPCA) in the Gwa̱xdlala/Nala̱xdlala (Lull Bay/Hoeya Sound) area — located up Knight Inlet on B.C.'s Central Coast.

The inlet off the northeast coast of Vancouver Island near Campbell River is home to a unique sponge and coral reef, estuaries and salmon bearing streams.

Frances Roberts, the Mamalilikulla marine and lands co-ordinator, says about a year and a half ago, the First Nation hired a bear biologist to assess grizzlies in the area.

She says the findings were stark.

"[They] alarmed us to the point that we knew we needed to get something done, needed to protect them and needed to help them because they were dying."

Roberts says the reef has also been damaged by fishing activity and they want to ensure they're able to protect what remains.

The Mamalilikulla say the IPCA declaration is intended to help it take the lead when it comes to planning and use of the area as it works to restore its traditional governance.

Chief John Powell linked the establishment of the protected area to larger issues of climate change and reconciliation.

He says in the mid-1990s there were about 150,000 fish in the three watersheds within the IPCA, but this year they counted just 26.

Powell says the declaration itself is a "constructive challenge" to the provincial and federal governments to work together with his nation.

He wants to establish protocols between his nation and the provincial and federal governments that would be similar to the protocols among individual First Nations that recognize each other's sovereignty.

"So that's the basis that we want to make these agreements with the government. Not under memorandums of understanding but under protocols which hold us responsible and the government as well."

Powell says a summit between B.C. cabinet ministers and First Nations leaders was planned for this week but cancelled because of flooding. He hopes meetings can be set up quickly with both the province and the federal government to discuss the Mamalilikulla's plans for the protected area.

"What we save, saves everybody. We don't just talk about the Mamalilikulla, we talk about saving our neighbouring tribes … and all the people of British Columbia. Because if this is lost, it's not going to be regained."