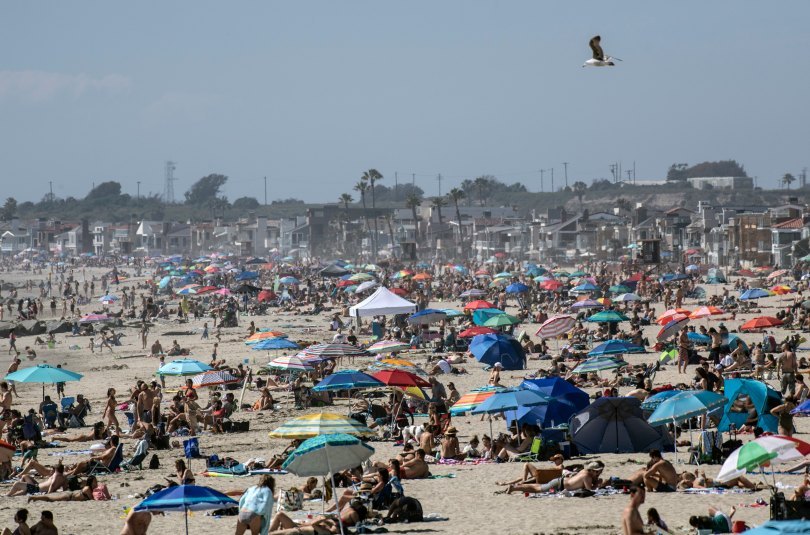 CA - ‘You would think it was summer’: Heat wave brings crowds to Newport, other OC beaches amid coronavirus fears

As heat blasted Southern California on Saturday, the scene on the sand at several beaches was what you’d observe on any hot summer weekend.

Visitors searched around town for parking, dropped off groups of teens, hauled down coolers and popped up umbrellas.

But this was no typical day at the beach.

The influx of tens of thousands of people worries coastal residents, who say some beaches have been too packed amid orders for people to stay at home to stop the spread of the coronavirus. In Newport Beach, the throngs were estimated at up to 40,000 on Friday with a similar crowd expected Saturday.

By contrast, beaches that authorities have shut down were deserted, with Los Angeles Police Chief Michael Moore displaying images on social media of empty stretches from Malibu, Santa Monica, Venice, to Dockweiler, where even putting a toe in the sand is forbidden.

In San Clemente, which opened back up this weekend, authorities decided to let people recreate, but not hang out at the beach. Moderate crowds showed up for opening day to stroll on the sand and beach path, or surf.

In Newport, surfer Tom Cozad said he did a surf check at 8:30 a.m. and saw people unloading their cars for a day at the beach, an early sign that it would be another crowded afternoon.

“You would think it was summer,” he said. “I get it, everyone has been locked up and they need to get out, but the city should plan for this. People are pulling up to the beach, getting out of Ubers, dropping off friends.”