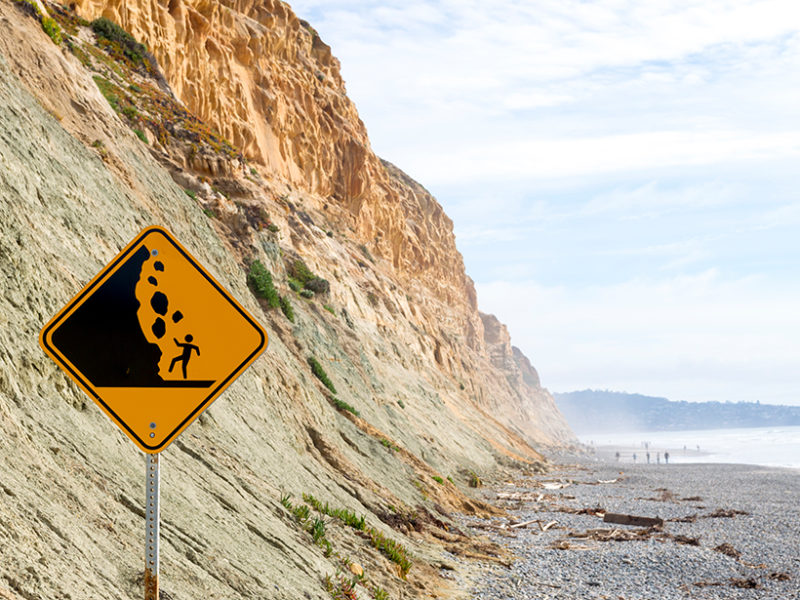 CA - Weighing Inputs of Waves and Precipitation to Coastal Erosion

Coastal cliffs are vulnerable to erosion, and multiple serious collapses have occurred in California in recent years. Now, a team of researchers studying coastal cliff erosion have succeeded in quantifying and separating erosional effects caused by ocean waves from erosion due to rainfall. The team conducted more than 150 lidar surveys of their study site in Del Mar, Calif., over a 3-year period.

Although there have been numerous studies examining the causes of erosion in rocky coastal bluffs, research that manages to both separate wave effects from precipitation effects and quantify them is rare. Adam Young, a coastal geomorphologist at the Scripps Institution of Oceanography and lead author on the new study, chalks this up to how infrequently cliff data are usually gathered. “Typically, we only had one or two lidar surveys a year,” Young said. “Those are great, but they only provide seasonally averaged information.”

Data collected only at seasonal timescales are a problem when you’re trying to tease out the details of cliff erosion processes. “In studies of coastal systems, especially those that change regularly, like beaches and cliffs, it really pays off to measure them frequently,” explained Jonathan Warrick, a research geologist with the U.S. Geological Survey who was not part of the new study. This problem with seasonal timescales is particularly relevant in places like Southern California, where, as Young noted in an email, “both rainfall and increased wave action occur in the winter. Therefore, higher frequency surveys that capture individual rainfall and large wave events are needed to separate and quantify how these processes drive cliff erosion.”