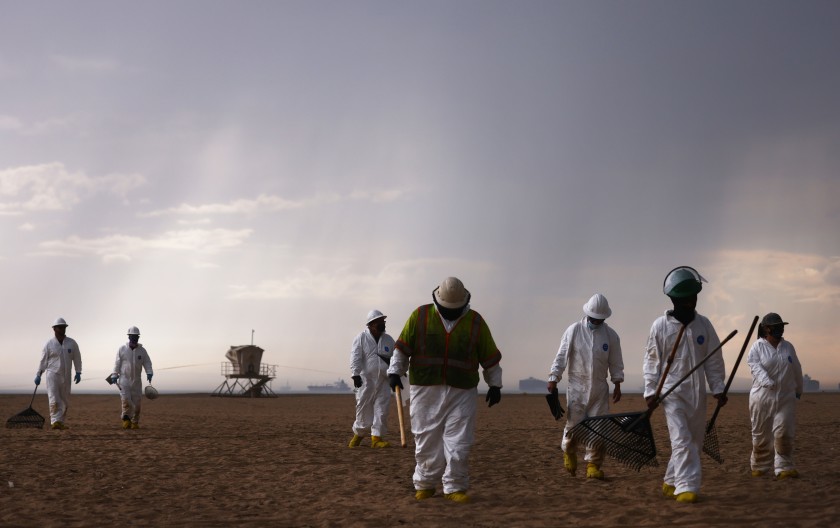 LOS ANGELES — Until now, the story of the worst Southern California oil spill in decades has been told by gut-wrenching images oil-soaked birds, dying fish and fouled wetlands. However, these images reveal just part of the story, researchers say.

Although much of the public’s attention has focused on what may happen to future generations of whales, porpoises, seals, sea turtles and migratory birds, the emphasis of many researchers now has shifted toward the minuscule and mysterious ecosystem that scientists call the microbiome.

It is a vast menagerie of small and microscopic organisms that comprise the foundation of the food web in coastal marine ecosystems. It starts with zooplankton adrift in turgid currents and bacterial colonies in mudflats, rock crevices and canopies of kelp and meadows of eel grass undulating in the tidal surges. Then come single-celled animals that feed on the colonies, and the larger predators that in turn feed on them.

Now, in laboratories from the National Oceanic and Atmospheric Administration to the University of California, Irvine, the big question is this: What were the impacts on viruses, bacteria, fungi, algae spores, zooplankton, fish eggs and fish larvae less than a quarter inch in length?

The labs’ findings are shedding new light on the potential long-term environmental damage from the spill and the ramifications of the nation’s fossil fuel addiction.

“When it comes to the lingering effects of oil slicks on marine organisms, size matters,” said John Incardona, a research toxicologist at NOAA’s Northwest Fisheries Science Center in Seattle. “Smaller organisms are going to get a bigger dose. Mature animals with gills and livers are generally less vulnerable to the toxic effects of oil.”

The scientific effort to understand how spilled oil affects Southern California’s coastal environment has suddenly become a hot topic of study at UC Irvine, where microbiologist Joleah Lamb and her students are collecting samples of seawater and kelp at nearby Newport Bay so that they can analyze and catalog the types, sizes and compositions of contaminants they contain.

The Levin Letter: Californians Have Made It Clear—No More Offshore Oil and GasDrilling Along Our Coast  Capistrano Dispatch