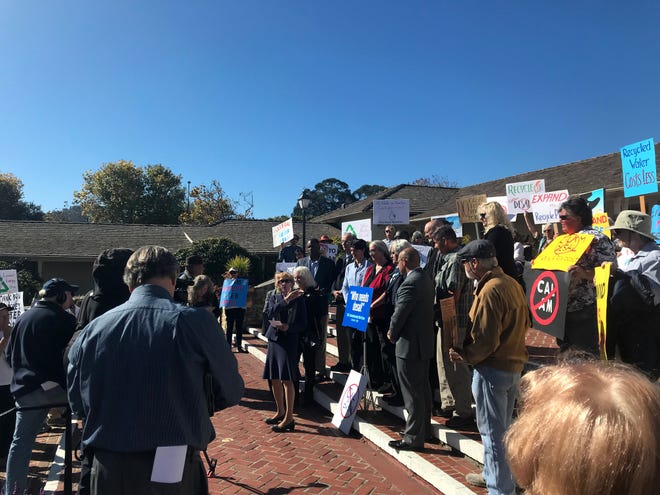 Expansion of the Pure Water Monterey recycled water project is the best option for the Monterey region to meet its future water supply needs.

Unfortunately, California American Water Co., a private water supplier, is discrediting the project in the hopes of instead getting approval for their much more costly, oversized and environmentally harmful groundwater desalination project to be built in, around and through the city of Marina.

Regulators at the Coastal Commission, State Lands Commission, State Water Resources Control Board and other permitting agencies should not approve the California American Water desal proposal, and instead allow the Monterey region to finally focus fully on the more realistic, more responsible recycled water supply solution.

This battle has been raging for years, with California American Water gunning for the profitable buildout of a desal facility to supply the hotels and wealthy communities on the Monterey Peninsula.  But pushing back are 1) the residents of Marina, who will suffer many of the project’s harms, 2) California American Water ratepayers who already pay some of the highest water bills in the country, 3) citizen groups concerned about the coastal ecosystem and groundwater impacts, and 4) local officials who advocate instead for sustainability, affordability, environmental protection and respect for community values.

The Newsom administration released its final California Water Resilience Portfolio in July to address water supply planning amidst droughts, floods, rising temperatures, depleted groundwater, aging infrastructure and other impacts from climate change. It emphasized the “need to harness the best of science, engineering and innovation to prepare for what’s ahead, and support long-term water resilience and ecosystem health.”

The Monterey Peninsula can provide a good demonstration of how this commitment to science and innovation plays out in the real world. Despite years of California American Water’s misinformation campaign, the Coastal Commission staff have demonstrated a commitment to the facts and reality.