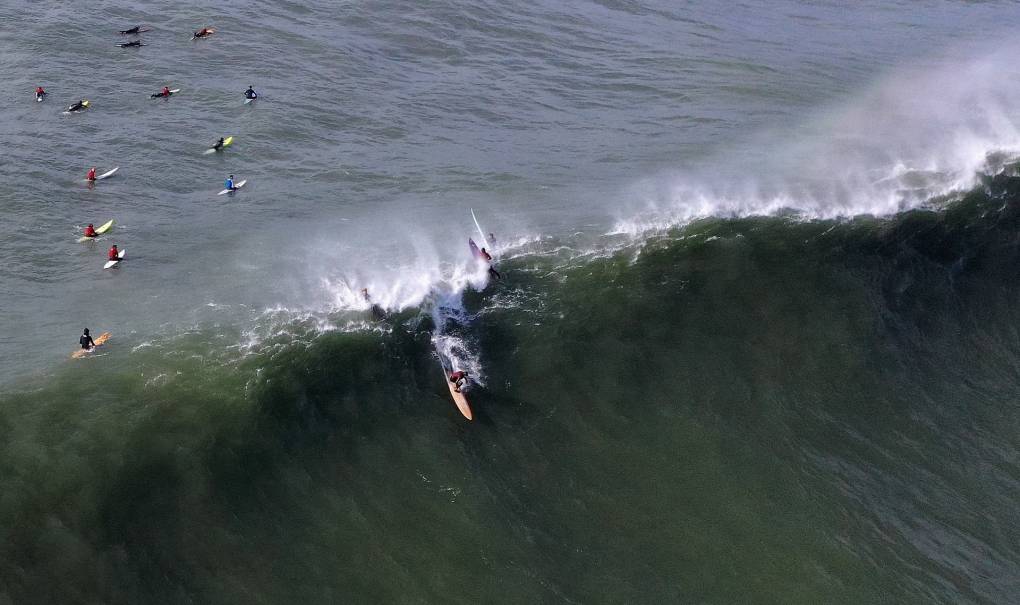 For roughly three decades, Grant Washburn has looked out his window each morning and considered the height of the waves crashing against California’s ragged coastline, before dutifully noting the conditions in white, wire-bound calendars.

For roughly three decades, Grant Washburn has looked out his window each morning and considered the height of the waves crashing against California’s ragged coastline, before dutifully noting the conditions in white, wire-bound calendars.

His meticulous record keeping of the conditions at one famous Bay Area surf break in particular — Mavericks, near Half Moon Bay, where waves can rise to the size of a four-story apartment building — has established Washburn as a sort of elder statesman and historian among local surfers.

Washburn’s surf journal documents the swell conditions and wave heights at Mavericks dating back to the early 1990s. When the monster waves are breaking, Washburn etches a drawing in his calendar.

Washburn knows more than most about the range of conditions — tide, weather and interval between peak waves — that must align perfectly for the towering blue giants to rise above the reef.

“Mavericks is an example of a place that is really specifically a measuring stick for what's going on in the deeper Pacific, because it doesn't break unless a certain ocean swell hits it,” he said. “And when that's happening, it's indisputable.”

This past December and January, Washburn drew a hell of a lot of waves .

As they grew, so did the level of chatter among the surfers who ride them and have been observing larger and more powerful swells at spots like Mavericks.

Mark Sponsler, a revered surf forecaster and founder of the site stormsurf.com, has described a “golden age” for big wave surfing caused by hotter temperatures and ocean water.

As temperatures and ocean waters warm, evaporation increases, which pumps more energy into the jet stream, generating more ferocious storms over the open ocean, the genesis of Mavericks towering waves.

Bianca Valenti, a San Franciscan and one of the best big wave surfers in the world, charged at Mavericks' monster waves more than a dozen times this past winter.

“This doesn’t feel normal,” she said recently. “It's so crazy. It feels like a tipping point, somehow. Like how the fires this season just seemed to last for so long.”

Oceanographers from UC Santa Cruz have actually quantified in research published in the journal Nature how the energy in ocean waves has increased over a period of roughly eight decades as a consequence of climate change.