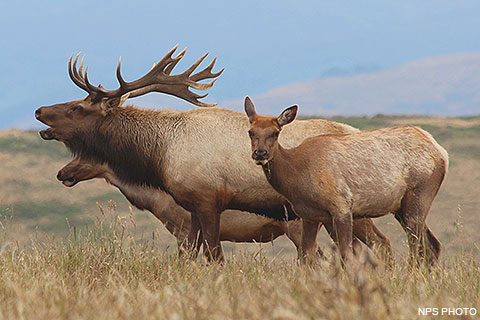 IN THE STORY of the United States, the calamity that befell the buffalo at the hands of pioneer settlers in the mid- and late 1800s is well known: Tens of millions of the animals—lifeblood of Indigenous peoples on the Great Plains—were hunted almost to extinction.

Less well known is what was happening at the same time in California, the only home of the continent’s smallest elk—the tule elk—long a source of food and clothing for the Indigenous Coast Miwok people. Named for the tule reeds that once covered miles of streamside habitat—and distinctive for their shaggy neck ruffs, white rumps, big eyes, and loud “bugles” bulls make to show their availability during mating season—tule elk are estimated to have numbered half a million before the arrival of Europeans. By the 1870s, white colonists in California had hunted them down to no more than 10 animals.

It took more than a century of conservation efforts, including hunting restrictions and relocations, for tule elk (TOO-lee) to recover to a population of 6,000. Now 750 of them—among the largest populations in the state—are the focus of controversy and intense debate. These elk live amid the grasses, woodlands, scrub, sand dunes, and creeks of Point Reyes National Seashore, a 111-square-mile triangle of land jutting into the Pacific Ocean some 45 miles north of the Golden Gate Bridge. They share space with mountain lions, mountain beavers, bobcats, gray foxes, and black bears. Elephant seals crowd the beaches, and gray and blue whales swim by on their annual migrations. Point Reyes has more than 900 plant species, 490 birds, and 80 mammals; it has 50 federally listed threatened, rare, or endangered animals, and 50 plants.

More than 5,000 dairy and beef cattle occupy about a third of the national seashore. Dating back to the 1850s, ranching has long been a flashpoint here, with opponents arguing that privately held cattle don’t belong on public land and that they cause water pollution, habitat degradation, and wildlife disruption. Others say ranching is a historically important feature of Point Reyes National Seashore, reflecting the state’s agricultural heritage.