West Coast
Baltimore’s second water wheel, above, designed to scoop trash and debris out of the harbor, was unveiled in late 2016. The concept has been proposed for Upper Newport Bay since 2017 and is a step closer this month after receiving approval from the California Coastal Commission.(File Photo) 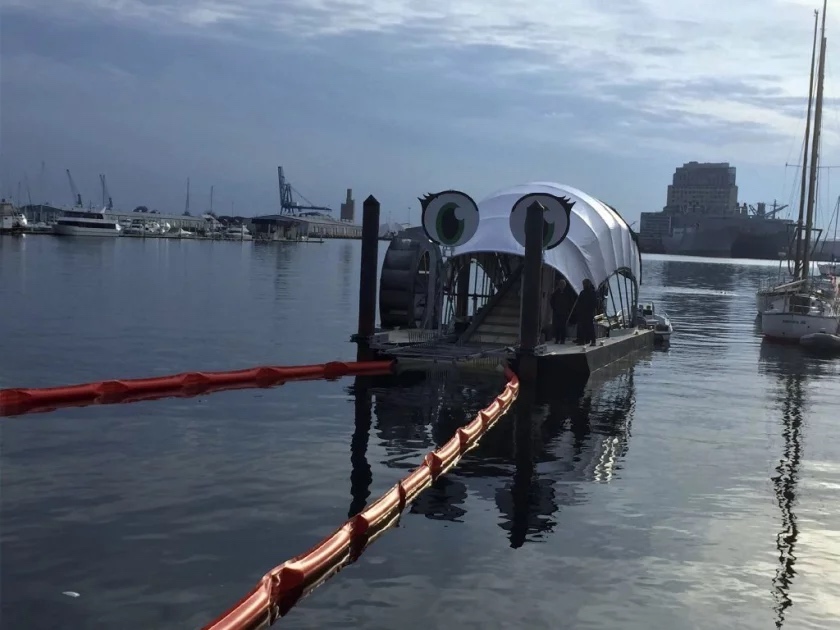 Newport Beach is drifting closer to operating a solar-powered, trash-snaring vessel known as a water wheel to clean up its bay, following recent approval from the California Coastal Commission.

The water wheel is expected to look like a snail with a paddle wheel or a conch shell crossed with a steamboat, mirroring its cousins in Baltimore’s Inner Harbor, where the first of two was installed in 2014.

As proposed, two booms would span the width of San Diego Creek and funnel trash toward the stationary barge, which would be mounted with a 17-foot-tall water wheel. Any debris would land on a conveyer belt, then travel into two dumpsters mounted on a fixed rail system. The dumpsters would be conveyed to land, where a garbage truck would access them and dispose of the trash.

Discussions to place the device in San Diego Creek date back to 2017, when estimates for the project ranged from $750,000 to $1 million. City spokesman John Pope said Monday the current cost estimate for the barge is not yet confirmed, as the drawings have not been finalized.

The city has about $2.2 million available in grants between the Ocean Protection Council and the Orange County Transportation Authority’s Measure M, according to city staff.

San Diego Creek, according to a staff report for the Coastal Commission, “introduces hundreds of tons of trash from surrounding urban development into downstream waterways each year.”

“San Diego Creek provides 80% of the fresh water to Newport Bay and probably 80% of the trash,” Stein said during his presentation to the commission.

Stein said that while the most obvious benefit of the project is that the unique vessel would be collecting trash, it could also stand as an icon to promote trash reduction regionally.

Through the use of the water wheel, the city would also be able to quantify the kinds of trash flowing into the bay, which could help provide data for possible future ordinances.

Coastal Commission staff noted in their report that while the barge will be an “effective” method of trash capture, it would not resolve the issue at its source. The city could further reduce the amount of trash entering community waterways by restricting single-use plastics and Styrofoam products in Newport Beach, the staff report said.

Commissioners agreed, saying city officials should consider the implementation of a single-use plastics ban, but they did not require it as one of their conditions for approval.