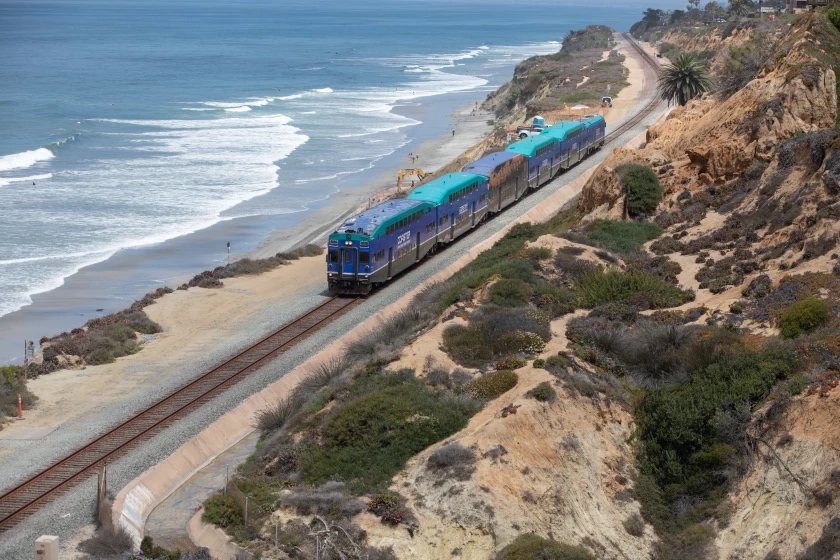 Bluff-top trail, stairway to beach among measures to be considered by California Coastal Commission

New beach access measures proposed for the railroad right-of-way on the Del Mar bluffs are deepening the rift between the North County Transit District, the city and the California Coastal Commission.

The San Diego Association of Governments, or SANDAG, is proposing a mile-long, bluff-top trail, a grade-level pedestrian crossing and a stairway to the beach in the next phase of Del Mar railroad stabilization work, which goes to the California Coastal Commission for approval this week.

Del Mar and the transit district have been tussling for years over a safety fence the railroad wants to install on the bluffs. More recently, the Coastal Commission entered the fray, saying the barrier would impede public access, and that the project should require environmental mitigation.

The trail, crossing and stairway are proposed as mitigation for the loss of sand and recreational opportunities caused by building additional seawalls and other structures along the beach and bluffs, according to a Coastal Commission staff report.

“Over a 30-year life, the proposed project seawalls would occupy 49,566 square feet of beach area that would otherwise be available to the public for coastal access and recreation,” the report states. The mitigation projects would help to compensate the public for the loss of that area, which is a little less than the size of a high school football field, along with the loss of bluff material held back by the seawalls that otherwise would be added to the beach.

Beach access has long been an issue along the tracks in Del Mar, where the only legal pedestrian crossing is at Coast Boulevard between Powerhouse Park and Seagrove Park. People cross the tracks illegally south of there in many places, an issue that’s become more contentious now that the transit district plans to install a safety fence along the right-of-way.

An average of 12 lives are lost each year due to trespassing on the tracks in San Diego County, according to NCTD. Many of those deaths are suicides, which a fence also could help to reduce. However, the fence is a separate issue from the bluff stabilization projects.

“Attempting to impose unrelated and unfunded conditions on a railroad maintenance and safety project that is critical to the stability of our region’s infrastructure is an overreach of authority by the Coastal Commission,” Tucker said in an email. “It underscores the reasons NCTD filed the petition with the Surface Transportation Board and the need for the STB to issue its decision.”