West Coast
The Eureka Slough during a 2019 king tide event gives a glimpse of what sea-level rise will look like around Humboldt Bay. 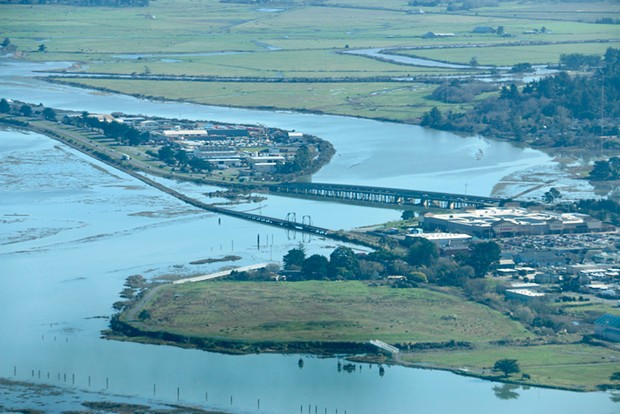 CA - Toward a Sustainable Blue Economy

Symposium focuses on harnessing the promise of the coast

The perennial conflict between environmental conservation and economic development may now be in remission, the crisis of climate change increasingly pushing industries into cooperation with environmental goals. One such path of co-existence, at least along the California coast, is the "Sustainable Blue Economy," defined by the World Bank as the "the sustainable use of ocean resources for economic growth, improved livelihoods and jobs while preserving the health of ocean ecosystems."

A three-day symposium on the "Sustainable Blue Economy" was held virtually last week, sponsored by California Sea Grant, the Humboldt Bay Initiative and several local consulting firms. The symposium featured scientists, community activists and an economist, as well as government officials of all denominations, ranging from county planners to the head of a state agency.

The keynote speaker was Wade Crowfoot, secretary of California's Natural Resources Agency, an umbrella agency that supervises the Department of Fish and Wildlife, the Ocean Protection Council, the Coastal Commission, the Coastal Conservancy and numerous other environmental agencies.

Let's hear it for the blue economy  economia

People identify climate action with electric vehicles or solar panels on roofs, Crowfoot said, but we also need to elevate the role of nature in helping us combat the climate crisis.

"Humboldt Bay is one of the most beautiful places in the world," Crowfoot said. "However, it faces different challenges than any other area in the state. Coastal communities face a daunting set of threats, and need resources ... so that these communities can continue to thrive decades into the future, even as climate effects intensify."

"We have the leadership, we have the resources and we have some very clear targets to achieve," he said, praising the proposed offshore wind farm, which he said would be located 17 miles off the coast, with no impacts on the viewshed, and minimal impacts to fishermen.