West Coast
The bioluminescence has been sticking around Orange County’s coastline for about a week, but it’s unknown whether the neon blue waves will linger for a month like it did in 2020. Newport Coastal Adventure captain Ryan Lawler speeds through the electric waves. (Photo courtesy of Mark Girardeau/Orange County Outdoors) 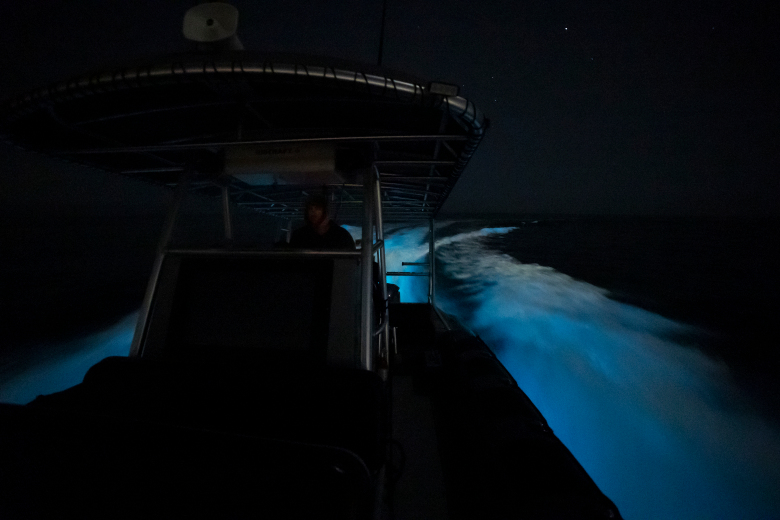 CA - Tips on how to see the elusive bioluminescent neon waves

The biggest question about the mysterious bioluminescence that makes the surf glow a neon blue is where will it show up next?

It’s not an easy question to answer, with strong ocean currents, whipping winds and swinging tides pushing around the elusive bloom of bioluminescent phytoplankton that put on a light show when they are disturbed.

But something to put on your bucket list is watching as the white crest of the waves explode with an electric blue as they crash on shore, lighting up dark stretches of beach.

People go to great lengths to see the Northern Lights splash vibrant colors across the sky, but our version of Mother Nature’s wonder is happening right here along the Southern California coastline.

So if you really want to get up close to see the rare phenomenon, here’s what we know so you can try to track it down before it’s gone.

Where has it been?

The phytoplankton bloom growing offshore isn’t quite as big as last year’s event … yet?… and it’s unknown how long this year’s neon electric waves will stick around.

Once in awhile, like last year, it can be seen week after week. Other times, it hangs around for just a few days. Some years, it never shows up at all.

Last year, the neon waves were first documented off Newport Beach, but this year the bright blue waves were reported first off Dana Point and Laguna Beach starting about a week ago. The bioluminescence has shown up almost nightly since, some areas showing just hints of blue and other spots bright and bold.

Sightings in Los Angeles County haven’t been reported yet this year, but they were in 2020 and might still be in the works for this year.