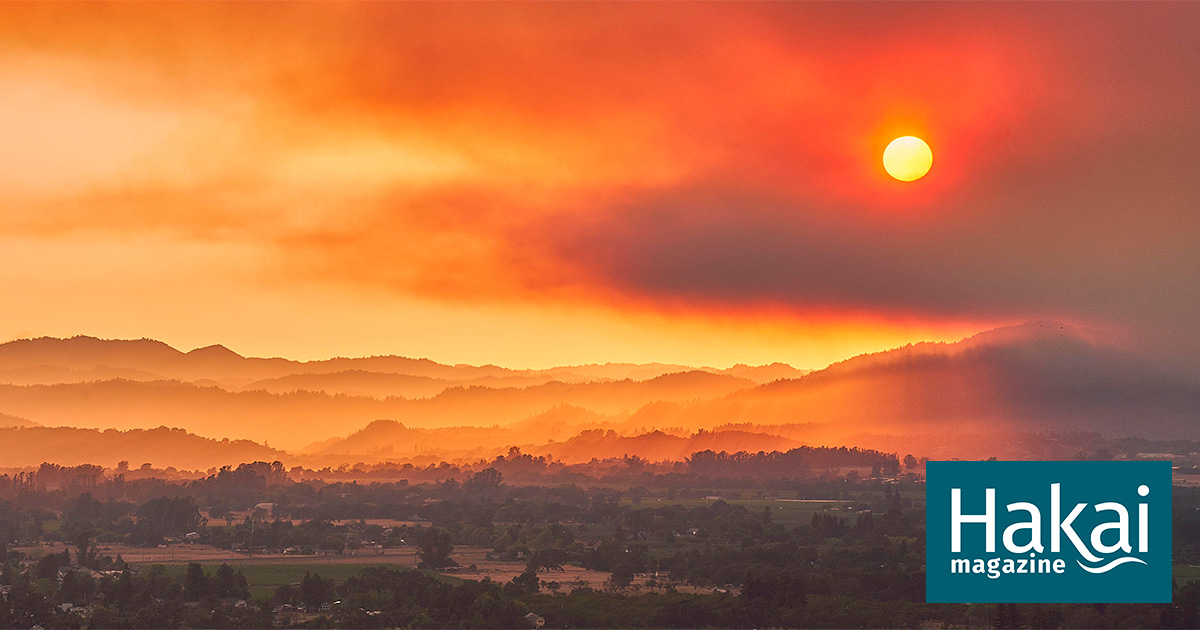 As wildfires, droughts, and floods deal a blow to coastal habitats, wild salmon are disappearing from waterways like California’s Russian River. Can conservation hatcheries save endangered runs?

Elizabeth Ruiz parked the white pickup at the side of a winding road, climbed out of the cab, and looked around in disbelief at what was left of the narrow valley: how could any salmon have possibly survived? Once a redwood forest so lush that the land’s contours were lost in it, every ridge and gulley was now exposed, eerily radiant under the Creamsicle-orange sky. Patches of ground still smoldered from the Walbridge Fire, which had blazed through the valley seven weeks earlier, in August 2020.

Ruiz, a biologist with the science agency California Sea Grant, adjusted their N95 mask for protection from the haze. Dark hair tucked under a hard hat and wading boots kicking up ash, Ruiz clambered carefully down the steep bank to Mill Creek. They were accompanied by a four-person field crew, all dedicated to saving a population of coho, one of the most endangered runs of salmon on the west coast of North America. Even bird calls rarely disturbed the quiet. Nearly all the wildlife had fled.

“It felt like we were at the end of the world,” Ruiz says, recalling that mild October day.

It’s not as though this corner of California had been pristine before 2020’s record-setting fire season. Mill Creek is part of the Russian River watershed, which drains 3,900 square kilometers of Sonoma and Mendocino counties. It’s an hour’s drive north of San Francisco, near enough that early buildings in the city were crafted with redwoods hauled from this watershed. So much gravel has been mined from the river—some of it used to construct the Golden Gate Bridge—that in places the streambed dropped to the height of a two-story house. In the late 1950s and early 1980s, the US Army Corps of Engineers built dams on the Russian River to flood the Lake Mendocino and Lake Sonoma reservoirs, walling off fish habitat. Scattered throughout the watershed, 500 smaller dams also prevented coho from reaching important spawning tributaries. By 2012, vineyards and wineries had become the dominant industry in Sonoma County, part of the wider region the tourism industry calls “wine country.” The complex landscape of oak-dotted hills and steep canyons that was once a haven for locally adapted salmon and steelhead now lends local vino its distinctive terroir.

A century ago, roughly 20,000 coho—a salmon species known for spawning in even the smallest creeks—would return to the Russian River and its tributaries in a typical year. By 1988, the number had fallen by 95 percent. In 2000, only six coho returned to spawn. Over the following three years, a coalition of county, state, and federal agencies brought the watershed’s last young coho into captivity at Warm Springs Fish Hatchery, near Lake Sonoma, 30 kilometers inland from the coast. The species has vanished or is on the cusp of disappearing in all but three places in central California, the southernmost limit of coho’s wild range. In the Russian River, the intervention was a moonshot attempt to keep the population alive.

Today, 500 to 1,000 coho return to the Russian River each winter to spawn. Some were born at the Warm Springs hatchery, others in the river, spawned by hatchery-born fish. Nearly all are descended from those last wild fish that were taken into captivity between 2001 and 2003. For almost 20 years, Warm Springs has sustained a coho run in a watershed that no longer has a wholly wild population of the species.

The hatchery sits at the foot of Lake Sonoma’s imposing earthen dam, which is still black from a recent prescribed burn by the Army Corps to prevent plant roots from weakening its structure. A steep concrete channel steadily spills reservoir water into Dry Creek and supplies the hatchery. Despite its name, Dry Creek is now one of the only waterways in the drought-prone watershed that dependably flows year round. Downstream of the scorched dam, the landscape alongside the creek opens onto endless rows of grapevines.

Twenty kilometers southeast of the hatchery, Mill Creek empties out of the rugged Coast Range into Dry Creek. Before the Walbridge Fire, Mill Creek was the perfect place in the watershed to study critically endangered coho. The valley cuts through the rainiest spot in Sonoma County, capturing water that the once thickly forested slopes kept cool through the summer. Each year, Warm Springs staff searched the creek for the best habitat, often stocking young salmon in the tributary’s upper reaches. But when Ruiz and their coworkers waded into the creek after the Walbridge Fire, ash drifted on the water and the gravel bars were streaked with iron-red flame retardant from the fight to save nearby homes. Shaken by the surreal scene, the team got to work searching for salmon. One person donned a heavy backpack wired to a long pole that emits an electrical charge into the water to temporarily stun fish. Ruiz and a colleague scooped the dazed animals into a bucket to be identified, tagged, and carefully released. By day’s end, they had found close to two dozen coho. In the Russian River watershed, in 2020, after a devastating fire that qualified as good news.

Relieved, the crew went for ice cream. The salmon had pulled through. For now.

The Russian River represents one possible future—perhaps the most likely one—for many other rivers on the west coast of North America: they will have hatchery salmon or no salmon at all. In this heavily developed watershed, climate change is already escalating droughts, fires, and floods, providing a preview of what may be in store for other regions. As wild stocks decline due to environmental change and other pressures, the hope is that facilities like Warm Springs, often described as “conservation hatcheries,” can keep salmon runs intact until their habitats are restored. It’s a task that sometimes verges on the impossible. As Mariska Obedzinski, who has led California Sea Grant’s coho monitoring program in the Russian River for almost 18 years, puts it, “It can feel like one step forward and five steps back.”

Hatcheries hold up a mirror to the stubborn belief that salmon can exist without intact habitat. On the west coast of North America, they have been used for over a century to supplement wild salmon in places where logged, dammed, and developed watersheds can no longer support abundant runs. But can salmon raised in captivity really replace wild ones? It’s a question I’ve been pondering for years, and, full disclosure, I once coauthored an opinion editorial with a consortium of salmon conservationists encouraging the British Columbia government to restore fish habitat, rather than build more hatcheries.

By the mid-20th century, scientists were finding evidence that artificially propagated fish were struggling to survive in the wild. “There is something wrong with hatchery trout,” a US Fish and Wildlife Service biologist wrote in 1948, suggesting that the fish—close cousins to salmon—were becoming domesticated. Today, hatchery salmon are generally bigger, bolder, and more combative than wild salmon; when produced by the tens or hundreds of thousands, they can outcompete wild fish. Paradoxically, though, nearly all hatchery salmon die quickly from poor life skills—failure to avoid predators or to successfully find food—or succumb to stress in the strange new environment. One facility manager told me that his coho had consumed bits of wood after release, likely mistaking the fragments for commercial feed pellets. “Hatchery fish are animals that are dressed in the skin of the salmon, but they’re missing most of what makes a salmon a salmon,” says Jim Lichatowich, a retired fish biologist and author of Salmon Without Rivers. “They don’t have that 10,000-year study of one place.”

Wild Pacific salmon are, in contrast, diligent students of place: each population is distinct and uniquely adapted to its creek or river. New genetic tools gave ecologists the power to document this remarkable diversity in the 1950s and ’60s, but geneticists soon cautioned that hatchery fish could degrade wild gene pools, potentially contributing to declines driven by overfishing and habitat destruction. In 1991, Snake River sockeye became the first west coast salmon population listed as endangered under the US Endangered Species Act. Canada’s expert committee on the status of wildlife identified the country’s first three endangered Pacific salmon stocks in 2002. Some hatchery managers proposed cultivating more fish to stem such declines, but true recovery seemed unlikely unless the facilities could produce fish as resilient as wild ones.

In 1997, Yakama Nation Fisheries, the fish management arm of the Confederated Tribes and Bands of the Yakama Nation, began collecting wild spring chinook for a new hatchery and research facility—Cle Elum Supplementation and Research Facility—in central Washington. Historically, the Yakima Basin of the Columbia River supported 200,000 springs. (This type of chinook migrates back to fresh water as adults in the spring, while “fall” chinook return later in the year.) By the late 1990s, though, salmon returning from the Pacific Ocean had to navigate nine dams on the Columbia and Yakima Rivers, and the stock had plummeted by more than 98 percent. Levi George, Yakama Nation chairman and an influential leader in the fight for fishing rights, envisioned the tribes and bands producing salmon for their own harvest, explains tribal member Charlie Strom, who manages the facility, which aims to protect and restore culturally important fish populations. But the Yakama weren’t looking for a traditional hatchery fish. They wanted something closer to the wild chinook that had been lost.