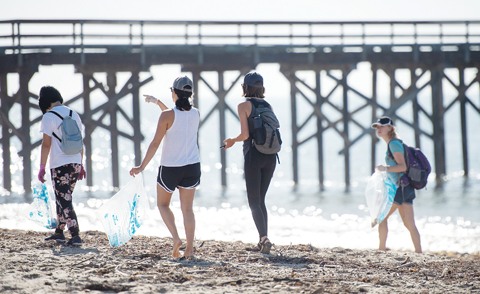 Local officials are discussing what can be done to preserve the future of Goleta Beach Park as a rise in sea-level and erosion threatens to push the coastline inward and damage infrastructure over the next few decades.

Santa Barbara County Parks Division, in conjunction with Caltrans, is working to create an adaptive management plan that will address erosion threats to Goleta Beach Park and its surrounding infrastructure for the years to come. The county held a public meeting last week to discuss the plan’s development and receive public feedback.

With more than 1.5 million visitors each year, the Goleta Beach Park is a key coastal access point for many low-income families and minority communities, Marie Laule, county consultant from Wood Environment and Infrastructure Solutions, said.

“Goleta Beach plays an important role in recreational, environmental and social equity values,” Ms. Laule said, later adding that the county’s objective is to maintain the recreation resources at the park for years to come.

A combination of extended drought, severe storms and rising sea levels have contributed to the erosion at the Goleta Beach coast. The historic drought that lasted from 2011 to 2019 largely eliminated natural nourishment and sediment flow to the beach for eight years. These conditions, compounded with severe storms between 2014 and 2017, caused beach erosion between 100 to 180 feet and damaged the park and its facilities.