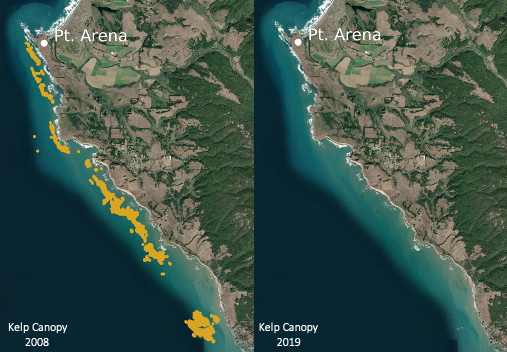 Most of Northern California’s kelp forest ecosystem is gone, replaced by widespread ‘urchin barrens’ that may persist long into the future, according to a new study

Satellite imagery shows that the area covered by kelp forests off the coast of Northern California has dropped by more than 95 percent, with just a few small, isolated patches of bull kelp remaining. Species-rich kelp forests have been replaced by “urchin barrens,” where purple sea urchins cover a seafloor devoid of kelp and other algae.

A new study led by researchers at UC Santa Cruz documents this dramatic shift in the coastal ecosystem and analyzes the events that caused it. This was not a gradual decline, but an abrupt collapse of the kelp forest ecosystem in the aftermath of unusual ocean warming along the West Coast starting in 2014, part of a series of events that combined to decimate the kelp forests.

Published March 5 in Communications Biology, the study shows that the kelp forests north of San Francisco were resilient to extreme warming events in the past, surviving other strong marine heatwaves and El Niño events. But the loss of a key urchin predator, the sunflower sea star, due to sea star wasting disease left the kelp forests of Northern California without any predators of sea urchins, which are voracious grazers of kelp.

“There were a lot of disruptions at one time that led to this collapse, and the system now persists in this altered state,” said first author Meredith McPherson, a graduate student in ocean science at UC Santa Cruz. “It’s a naturally dynamic system that has been really resilient to extreme events in the past, but the die-off of sunflower stars caused the resilience of the ecosystem to plummet. As a result, the kelp forests were not able to withstand the effects of the marine heatwave and El Niño event combined with an insurgence of sea urchins.”