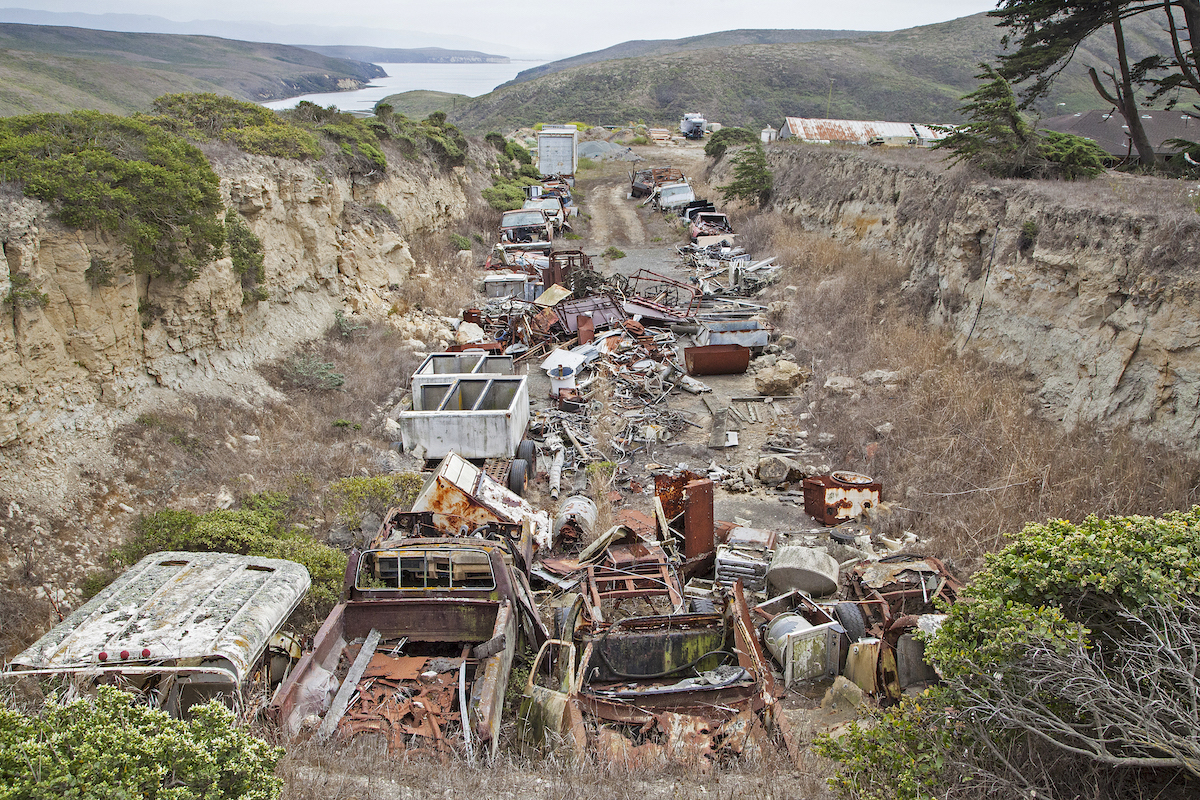 My guide on this safari is Jocelyn Knight, wildlife photographer. We’re stalking a toxic waste dump hidden from public view behind a hill at “Historic E Ranch, established circa 1859” land lorded by the National Park Service.

Park regulations require Seashore pastures to remain open to the public, but the dump is inside the E Ranch “core” of barns and dwellings, and the public is disallowed.

To avoid encounters with park rangers or others who might want to thwart our mission to photograph the dump, we crawl on hands and knees through a thorny thicket, around a pond polluted with old tires, empty barrels, oxygen-depleting algae.

Duckwalking up the hill toward the dump, dried out dirt clods seem to explode underfoot. We deploy hand signals, as there’s a large dog we’d rather not greet. It’s all a bit nerve wracking.

A year ago, August, Knight made this trek by herself, photographing a trench packed with broken car and truck bodies, oily engines, fuel containers. She emailed the evidence to Park Superintendent Craig Kenkel. He replied, “When leaseholders violate lease conditions, our approach, if possible, is to hold the leaseholder responsible for correcting the violation. Thus far, Mr. Nunes is doing so.” Kenkel cautioned Knight not to revisit the site without an invitation from the Nunes family, which leases and operates E Ranch.

But we intend to find out if the waste was removed. Rising to full height, Knight shoots the dump, snap, snap. Much of the waste is gone, but there are still dead machines, piles of tires, plastic barrels. Kenkel and the Department of Interior did not respond to inquiries about the toxic waste dump. Members of the Nunes family did not respond to requests for comment.

There’s another type of environmental disaster at E Ranch. According to a Marin County Environmental Health Services (EHS) investigation in June, “There was a very puddled (appeared to be sewage) area in the cow pasture adjacent to the [E Ranch] home. … It is clear that [the] present leach field is not accepting sewage from the tank properly.” According to EHS investigators, a septic tank was installed without the required permit; its sewage level exceeded the operational limit; they could not locate a leach field. The ranch land drains into the Pacific.

The Nuneses have farmed in Point Reyes for more than a century. In 1971, they sold E Ranch to the Park Service, leasing it back for cattle grazing; the family also runs a dairy at A Ranch adjacent to the Lighthouse. A third of the park is given over to cattle and dairy ranching by the lineal descendants of European farmers who settled Point Reyes in the mid 19th century.

Park histories portray these “multi-generational ranching families” as “stewards of the land,” and the ranches are listed on the Register of Historic Places. Since the 1970s, Parks has spent millions of dollars improving commercial ranching infrastructures at the “historic” ranches, even as cattle trample Indigenous archeological sites, and bovine and human wastes contaminate pastures, streams, estuaries, bays, wetlands and the ocean.

In February, motivated by a hiker’s discovery of raw sewage pooling in a pasture, Marin EHS began inspecting ranch septic systems, for the first time in modern memory. More than half of the 17 septic systems examined had serious leakages; seven were so far out of compliance with regulations that they require completely new installations. Simultaneously, the California Water Quality Control Board investigated environmental conditions at Seashore dairies, finding many instances of animal wastes leaking into coastal waters.