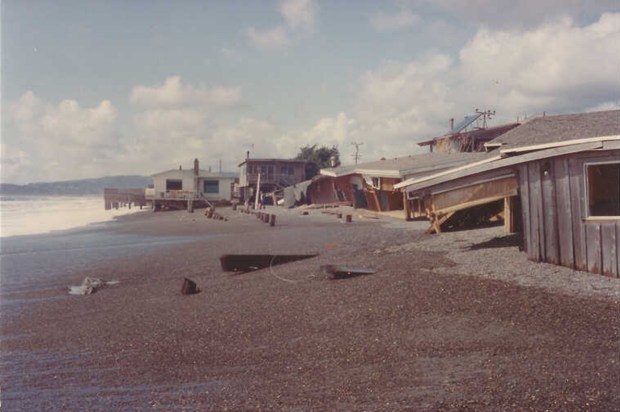 For residents of Stinson Beach, the sight of ocean waves running up their streets, carving away tons of sand, flooding homes and even washing a house or two into the sea every decade or two has been an accepted tradeoff for a beachside lifestyle.

The storms that pummeled the community this month, causing millions of dollars in damages to homes, were similar to others that longtime residents like Celeste Laprade experienced in the early 2000s, the late 1990s and a particularly destructive storm in 1983. Major flooding events date back to 1940, 1956 and 1978.

“We all chose to live on the beach and we realize that that can happen,” said Laprade, secretary of the Stinson Beach Historical Society. “We all understand that living out here has its dangers.”

But Marin County sea level rise projections show the flooding and damage are expected to become a regular part of life at Stinson Beach in the coming decades unless defenses are put in place.

County studies in 2016 and 2021 concluded that 200 to 400 homes in the community of nearly 800 homes are expected to experience flooding by 2030, with the number increasing to 600 by the end of the century. Beginning in 2050, beaches visited by millions of people could begin to disappear should sea levels increase by 3.3 feet or higher, according to the projections.

“We’ve seen what can happen at this level of the sea,” said Jack Liebster, a planning manager with the Marin County Community Development Agency. “If it’s 3 feet higher or 2 feet higher, it’s going to have a tremendously greater impact on the area. It’s something we need to get ahead of.”

The worst of the damage from the recent storms occurred from Jan. 5 to Jan. 7, when swells reached heights of 15 to 19 feet across the coast, according to the National Weather Service. Stinson Beach residents posted videos of ocean water gushing into the Calles neighborhood and battering beachside homes on Jan 5.

Residents in the Patios neighborhood and Seadrift to the north were asked to stay in their homes.

At least two residents were unable to leave because of the flooding and had to be rescued, Peri said.

“There were two rescues that took place by neighbors and rescuers,” Peri said. “The community really bonded together and local community members who have been through this and know the situation were on their exemplary behavior.”

The National Park Service is also studying ways to protect beach access and protect against storm surges and coastal erosion in the future. Options include creating an overflow channel in Easkoot Creek as well as relocating utility facilities and roadways.

“As we look at possible options for repair, we are also planning for a long-term solution,” Espinoza said.

But after experiencing several storms during her nearly 40 years at Stinson Beach, Laprade questioned whether these defenses will be enough in the future.

“I don’t know that any permanent change can occur,” Laprade said. “It’s just the risk we take for living out here.”