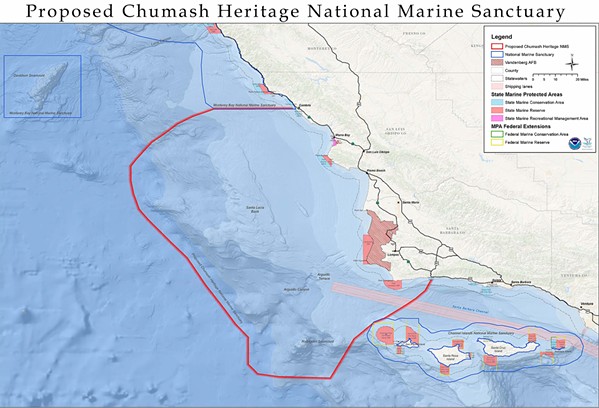 If finalized, a new sanctuary stands to protect marine ecosystems, sea otters from drilling and other threats

Sacramento, Calif.-- From Point Conception to Cambria, a large portion of California’s coastline moved past a roadblock and remains in the running to receive permanent protection after the National Oceanic and Atmospheric Administration (NOAA) announced today it would keep the Chumash Heritage National Marine Sanctuary’s nomination alive for another five years.

If created, the sanctuary would provide additional protections and funding to management and research for the waters between the Monterey Bay and Channel Islands National Marine Sanctuaries. Proposed in 2015 by the Northern Chumash Tribe and a coalition of environmental and local groups, sanctuary status could be used to permanently prohibit oil and gas development off this part of the California coast. The designation would also  provide federal funding and coordination to better protect and manage key ecosystems, cultural sites and resources in the designated area.

This summer, NOAA opened a public comment period to determine if the nomination still had sufficient public support, and the response was resounding. Environment California Research & Policy Center’s national partner, Environment America, submitted more than 10,000 comments in support of designating this area as a national marine sanctuary.