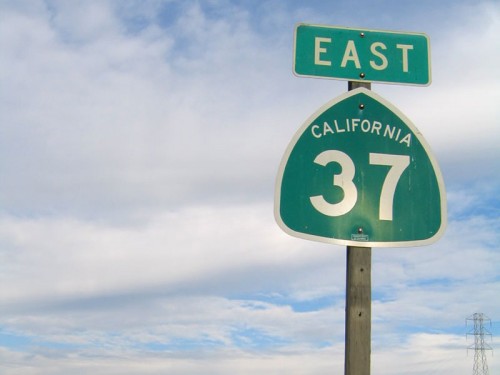 A Stanford University study warns that coastal highways face a growing risk of flooding from sea level rise and storm surges that cascade into delays for commuters with limited road alternatives that may be miles away from flooding.

Growing delays for commuters getting to work are bound to spill over to the delivery of goods through ports, warehouses and manufacturers.

Two of the study’s authors told AJOT that the domino effect of flooding, which focused on the San Francisco Bay Area, is going to require a redesign of transportation systems as sea levels, storm surges and flooding worsen over the next thirty years.

The study entitled “When floods hit the road: Resilience to flood-related traffic disruption in the San Francisco Bay Area and beyond” states:

Co-author Indraneel Kasmalkar, a PhD candidate at the Institute for Computational and Mathematical Engineering at Stanford, cited flooding threats at the San Francisco Bay Bridge and two other Cross-Bay Bridges, “which could suffer shut downs if the approaches to the bridges become flooded.” He also cited the case of California State Route 37 linking Marin, Solano and Napa counties in the North end of the San Francisco Bay. SR 37 was temporarily shut down in 2019 due to flooding. Within 20 years the effects of global warming and sea level rise could result in the highway being flooded multiple times per year, researchers believe.

Elevating SR 37 is proposed to keep the roadway flood free, but could cost California billions of dollars to construct: “The problem is that if the road approaches to SR37 become flooded, then elevating SR 37 will not work.” Kasmalkar noted.