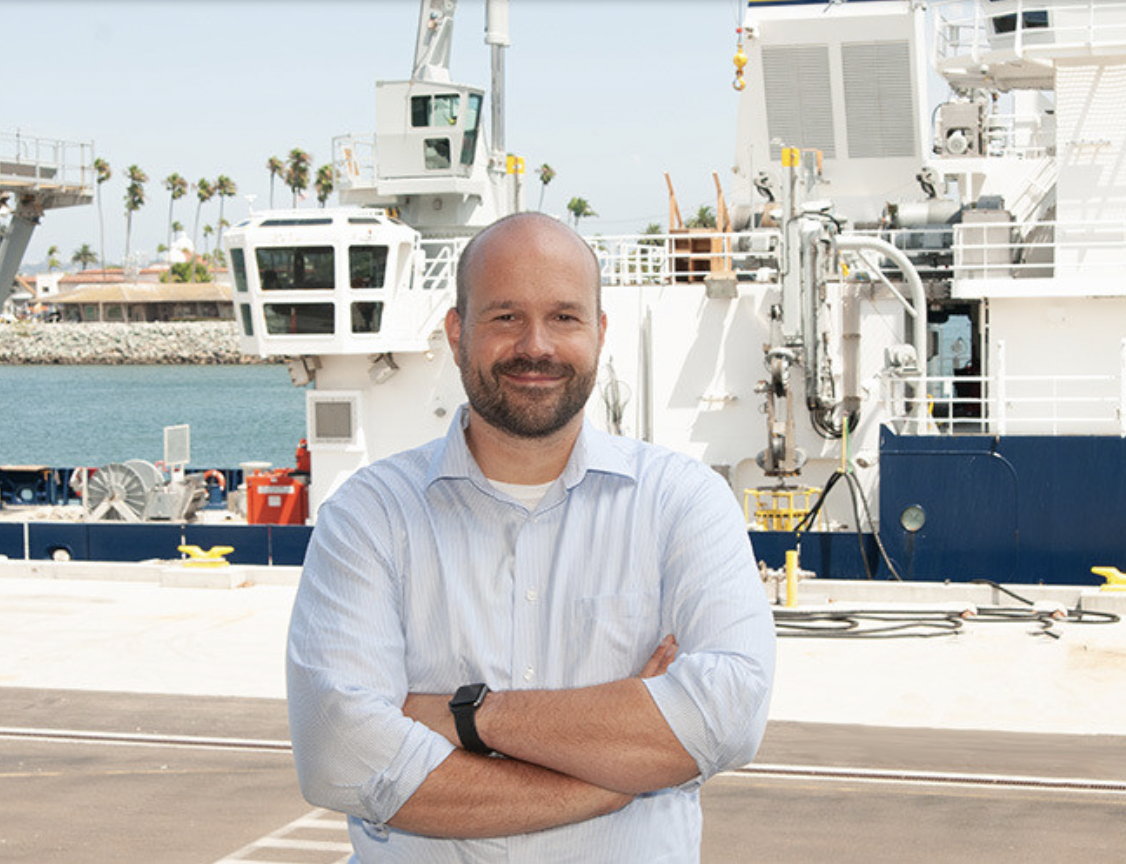 Scripps Institution of Oceanography at UC San Diego has hired a new marine superintendent to head its world-class fleet of scientific research vessels.

Joost van der Zwaag, an experienced technical operations manager, will take on this integral role from former marine superintendent Zoltan Kelety, who held​​ the position since 2009.

The marine superintendent oversees the operations of the research vessels at Scripps Oceanography, which actively serve the greater ocean science community around the world through oceanographic research and hands-on educational experiences.

“Joost has a tremendous background in marine operations, with really unique experience sailing both as a deck officer and as an engineer,'' said Scripps Associate Director for Ship Operations and Marine Technical Support Bruce Appelgate. “It's very rare to have practical working experience in both fields, and enables deep and broad understanding of the issues our mariners face.”

Van der Zwaag’s impressive career at sea has equipped him well for this critical role. He earned a dual deck and engine license during his time in the navigation and marine engineering program at Zeevaartschool Abel Tasman in the Netherlands, prior to sailing for global container shipping line Maersk Worldwide as both a deck officer and an engineer. At Holland America Line, van der Zwaag climbed in ranks from third engineer to chief engineer, before moving to executive service in several operations management roles. More recently, he returned to Maersk as fleet superintendent, where he managed its four U.S.-flagged container ships in the demanding field of commercial shipping.

Additionally, van der Zwaag holds a master's degree in business administration from Middlesex University, a diploma in ship superintendency from Lloyd's Maritime Academy, and is a certified Project Management Professional. He has an active chief engineer (no limitations) license, as well as a chief mate license.

“I am honored to work with and meet some of the most knowledgeable people in the oceanographic field. The mariners, scientists, and technology at Scripps provide me with deeply enriching perspectives and knowledge,” said van der Zwaag. “Thanks to research, evidence-based decision-making can shape a better future for many generations—especially in terms of anthropogenic and natural climate change. I genuinely cannot think of a better place to do what I do best, while working towards a more noble goal. For those reasons, I am extremely proud that I get to contribute here at this world-class institution.”

As van der Zwaag takes the helm of the Scripps fleet, former superintendent Kelety will be transitioning to begin his new role as program manager for the forthcoming California Coastal Research Vessel (CCRV) at Scripps. The ship will have a first-of-its-kind hydrogen-hybrid propulsion system, utilizing both conventional diesel generators as well as hydrogen fuel cells to produce the ship's power. The innovative new vessel will be able to conduct 75 percent of its missions as a true zero-emission vessel.

“Scripps welcomes Joost and all the experience and enthusiasm he brings,” said Scripps Director Margaret Leinen. "We are glad to have him join us, and we look forward to the many contributions he'll be able to make in advancing our ability to support science and education at sea aboard the world's finest oceanographic research vessels."

Scripps Institution of Oceanography at the University of California San Diego is one of the world’s most important centers for global earth science research and education. In its second century of discovery, Scripps scientists work to understand and protect the planet, and investigate our oceans, Earth, and atmosphere to find solutions to our greatest environmental challenges. Scripps offers unparalleled education and training for the next generation of scientific and environmental leaders through its undergraduate, master’s and doctoral programs. The institution also operates a fleet of four oceanographic research vessels, and is home to Birch Aquarium at Scripps, the public exploration center that welcomes 500,000 visitors each year.

At the University of California San Diego, we embrace a culture of exploration and experimentation. Established in 1960, UC San Diego has been shaped by exceptional scholars who aren’t afraid to look deeper, challenge expectations and redefine conventional wisdom. As one of the top 15 research universities in the world, we are driving innovation and change to advance society, propel economic growth and make our world a better place. Learn more at ucsd.edu.