West Coast
Map shows areas that would be affected by storm flooding or tidal inundation due to six feet of sea-level rise in the next 80 years | Credit: Courtesy City of SB 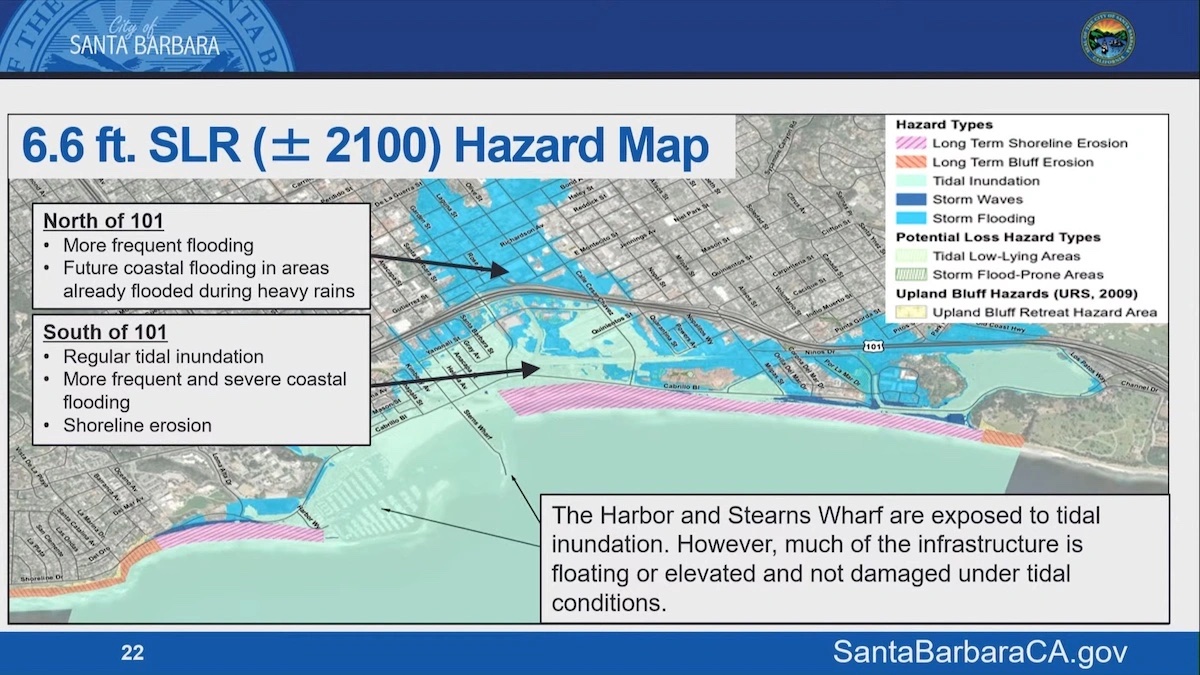 Santa Barbara’s city leaders are looking toward the future and embarking on a decades-long plan to combat the inevitable encroachment of the ocean on the waterfront due to climate change, with three projects funded by over $2 million in grants from the California Coastal Commission

Planner Melissa Hetrick presented the “Sea-Level Rise Adaptation Plan” at Tuesday’s City Council meeting, laying out the 30-year plan and the three grant-funded “adaptation” projects that would lay the foundation for addressing what could be over six feet of sea-level rise in the next 80 years.

“In the 30-year timeframe, it’s anticipated that around 1.5 to 2 feet of sea-level rise will occur,” Hetrick said. She provided maps that showed the potential risks that could occur by 2100, when six feet of sea-level rise could bring “storm flooding and tidal inundation significantly north of Cabrillo Boulevard.”

These next 30 years, she explained, would be the time to prepare the waterfront for increased flooding, while we are still decades away from the city needing “larger scale measures” such as levees or raising the height of Cabrillo Boulevard, which she says “would really change the character of the existing waterfront.”

The grant would fund the $630,000 Regional Coastal Adaptation Monitoring Program; the $245,000 Airport and Goleta Slough Adaptation Plan; and the $1.2 million Water Adaptation Plan. All three projects would monitor and study the shoreline from Goleta and Santa Barbara to Ventura County in collaboration with the Beach Erosion Authority for Clean Oceans and Nourishment (BEACON) and suggest specific action over the next 10 years by finding high-priority areas.

BEACON has worked with city and county leadership up and down the coast, from Goleta to Ventura,  including developing a “sediment management plan” to address natural erosion with beach berms or dunes that would redirect flood-prone areas.

The city is at the forefront of this type of action, and Hetrick said that with $550 million earmarked for “resiliency projects” along the coast, the biggest problem would be juggling all the projects at once. “There is quite a bit of money coming down the pike from state agencies that we could apply for,” she said. “Right now our biggest constraint, to be honest, is having staff time to manage all these projects which would be occurring at the same time.”

The city is also in the process of applying for three new projects that would address coastal drainage, the Laguna tide gate system, and the restoration of Sycamore Creek.

“It’s very gratifying to see that implementation is already happening,” said Councilmember Kristen Sneddon, who said she often uses the  maps when teaching at Santa Barbara City College to show how extreme the impacts of sea-level rise can be to the local environment. “A lot of the public still is not aware,” she said.

Councilmember Meagan Harmon, who serves on the California Coastal Commission, said she was proud to relay the compliments of the commissioners, who praised city staff and the committees for their work. “It’s rare to get that type of complement,” she said, “They really spoke about how your work is second to none in the state of California.”

The resolution passed unanimously, and the grant funding will be distributed in the city’s budget for the three projects. For more information and to view an interactive hazard map, visit the city’s Sea-Level Rise Adaptation Plan website.