West Coast
About 60 barrels were visually identified by Jason, a remotely operated robot that also collected samples of nearby sediment with large tubes, top. One spot had a DDT concentration 40 times higher than the highest level of surface contamination recorded at the Palos Verdes Superfund site. (David Valentine / ROV Jason) 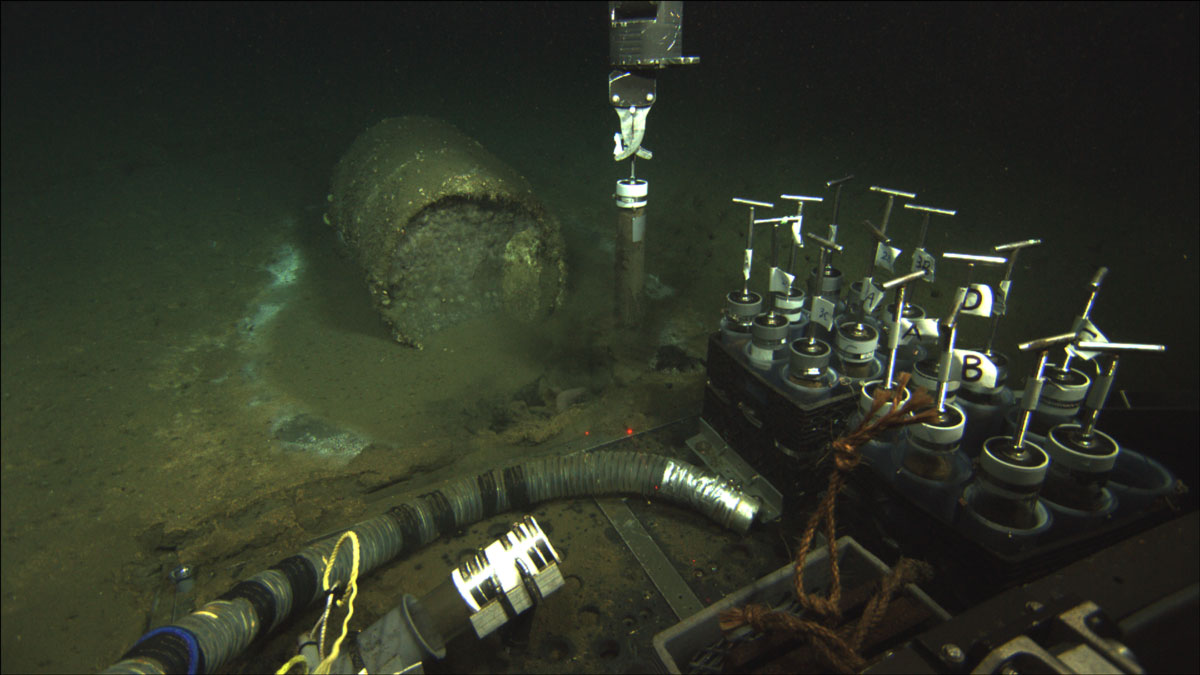 LOS ANGELES, Aug. 5 (Xinhua) -- The federal investigation into the historic toxic waste dumpsites off the coast of Los Angeles and Catalina, an island southwest of the second largest U.S. city, exposed a far more extensive spread of DDT and other toxic chemicals than anyone had previously estimated.

According to a report released Friday by Phys.org, one of the most updated science websites in the United States, a recently disclosed internal memo in the Environmental Protection Agency (EPA) showed that federal regulators are discovering that the amount of contamination looks to have been grossly underestimated.

The sites had been believed to contain about 27,000 barrels of DDT on the ocean floor, but the EPA now estimates that historic dumping operations covering 14 sites may include up to half a million tonnes of DDT and other toxic chemicals that were poured directly into the open sea from tanks on barges, as well as radioactive waste, toxic chemicals, petroleum waste, and military explosives.

Regulators also were quoted as saying that although shipping records noted the number of discarded barrels but the word "barrel" in these documents appeared to refer to a unit of volume, rather than a physical barrel.

"That's pretty jaw-dropping in terms of the volumes and quantities of various contaminants that were dispersed in the ocean," said a concerned John Chesnutt, leader of the EPA investigation's tech team. "There's still so much we don't know."

Dichlorodiphenyltrichloroethane, or DDT, a deadly toxin first believed to be a "miracle" insecticide that prevented the spread of malaria and protected crops from insect depredation, is now known to be toxic to humans, marine life and wildlife. It is readily absorbed into human and animal cell tissue and takes generations to break down to harmless chemicals.

Through the process of biomagnification, the toxin becomes increasingly concentrated in each animal that feeds on contaminated prey from lower on the food chain, starting with one-celled phytoplankton algae, through shellfish, fish, then wildlife, all the way to mankind.

DDT was first developed in 1874 but didn't come into commercial use until 1940, then it began to be used widely in agribusiness and the military until banned in the country in 1972.

But not before Montrose Chemical Corp and other polluters had dumped tens of thousands of tonnes of it off California's coast near Los Angeles and Catalina.

Dianne Feinstein, U.S. Senator from California, has described the DDT dumping as "one of the biggest environmental threats on the West Coast."

Widespread commercial use of DDT caused intense ecosystem disruption and serious public health hazards, including investigations into the detrimental effects on women and pregnancy and the near extinction of falcons and bald eagles by making their shells to thin and brittle to survive until hatching.

Now the concerns have shifted to the long-term health and environmental effects of the toxic dumping off the coast of California, especially on marine life, California's critically-endangered condors, dolphins, sea lions and bird populations as well as public health and safety concerns for local residents.

These disturbing revelations have given rise to strident public outcries and calls for action. Led by Feinstein, the U.S. Congress has approved a superfund of 5.6 million U.S. dollars to investigate the offshore dumping problem, and California Governor Gavin Newsom has approved a matching amount, bringing the total superfund to 11 million dollars.

Mark Gold, Newsom's Deputy Secretary for Coastal and Ocean Policy, said to the press, "The fact that here we are, more than 50 years later, and we don't even know what's in the 14 dumpsites other than a summary from a report in 1973 from the Southern California Coastal Water Research Project? That's just not acceptable,"

"It really makes you question: OK, how big of a problem is deep-water ocean dumping ... along not just the California coast, but nationwide?" he asked.

While the EPA and various state and federal agencies, as well as scientists and university departments have been collaborating on the plans for further investigation and chemical sampling, no one has yet been able to pose a suggestion as to what can actually be done about this vast ticking time bomb slowly decaying on California' ocean floor.

"There's not an environmental program, particularly at the federal level, that was designed to address the challenges, the circumstances that these disposal sites pose," said John Lyons, acting deputy director of the EPA's Region 9 Superfund Division.  ■