West Coast
Large waves pummel the coast of Pacifica. State lawmakers are grappling with the many threats looming over the California coast as sea levels continue to rise.(Carolyn Cole / Los Angeles Times) 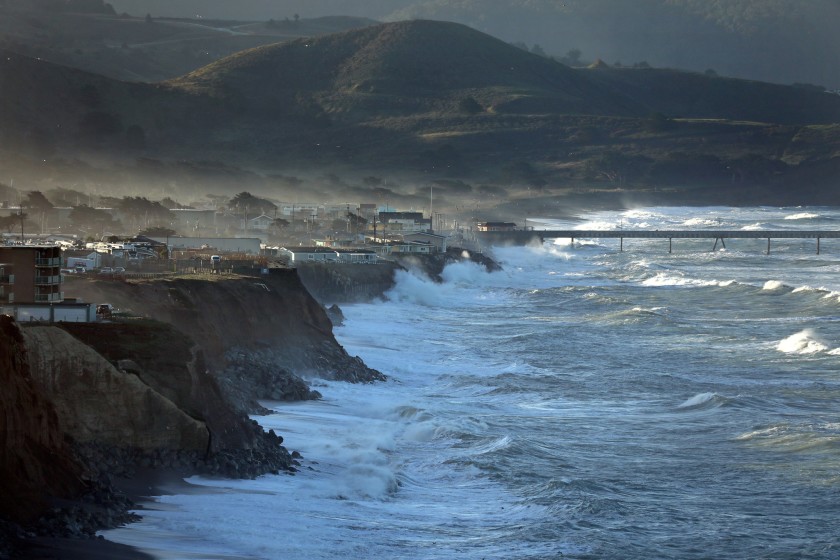 CA - Rising seas already overwhelm the Bay Area. Time is running out for California to act

When Jeff Moneda first started working for Foster City, where trails wind along the town’s scenic lagoons and the nicest homes perch along its picturesque canals, he received an email from federal emergency officials that jolted him into action.

“The first thing in my inbox was a letter from FEMA that said, ‘You need to raise your levee or we’re going to place the entire city in a flood zone,’” said Moneda, the city manager. “Talk about stress.”

For a city of 34,000 that was built on filled-in marshland along San Francisco Bay, the future hinges on the strength of an eight-mile-long levee that for decades has held back the rising sea. But with every tide and storm, the water keeps trying to move back and reclaim the town. Flood maps, even in more moderate scenarios, show much of the city inundated if nothing is done.

The fate of Foster City and the rest of the Bay Area was front and center last week as state lawmakers grappled with the many threats California must confront as the ocean pushes farther inland. A special committee of state lawmakers gathered — for the second time in two months after years without meeting — to reignite a much-needed discussion on how to better prepare communities up and down the coast from devastating loss.