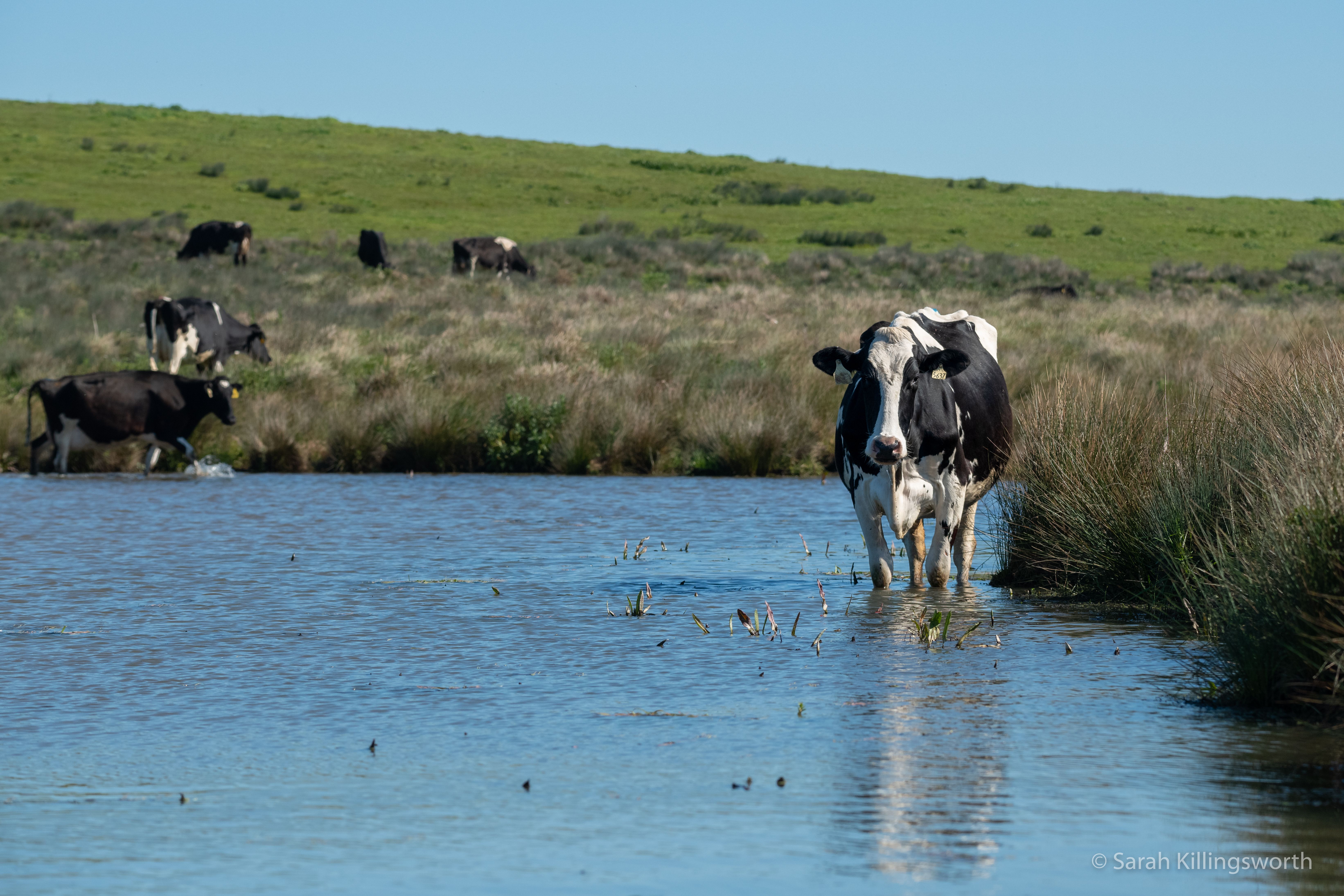 The report comes a week before the California Coastal Commission is set to vote on whether to approve a water-quality strategy prepared by the National Park Service to address chronic water pollution caused by private ranching in the only national seashore on the West Coast. The commission unanimously rejected a previous draft this spring.

Point Reyes is one of a dwindling handful of national parks that allows cattle ranching. Ranchers lease 28,000 acres, more than one-third of the National Park Service’s land at Point Reyes, where they graze 5,000 beef and dairy cattle. The national seashore is an hour’s drive from the San Francisco Bay Area and received some 2.5 million visitors last year.

“The degree of pollution is astounding, especially considering it is occurring on the California coast and in a National Park,” said Scott Webb, advocacy & policy director with the Marin-based Turtle Island Restoration Network. “I don’t care if it’s commercial agriculture or natural gas development, we need to stand up to private industry that continues to profit off destroying public land, hard stop.”

Lovell’s 2022 report is the first independent report that studied all the dairies with a large enough sample size to meet current state protocols for testing. It revealed eight popular destinations in the Drakes Bay, Drakes Estero, Kehoe and Abbotts watersheds contained bacteria concentrations exceeding state standards. Some bacteria concentrations were more than 170 times the health-based standards for fecal coliform.

The study revealed that wading, swimming, kayaking and other forms of water recreation in Kehoe Lagoon and Drakes Estero results in unacceptable health risk, as does shellfish harvesting in Drakes Estero. The study identified discharge of cattle manure as the cause of the pollution.

“This water quality data should concern everyone who knows and loves Point Reyes,” said Chance Cutrano, director of programs at the Marin-based Resource Renewal Institute. “Environmental and regulatory issues keep mounting at Point Reyes National Seashore, and this report reinforces the growing consensus that the beef and dairying ranching in the national park is unsustainable.”

The report is the latest new information revealing the depth of substantial water pollution occurring in the national seashore:

● A Heal the Bay Report published in June 2022 gave an F grade to numerous beaches on the seashore due to poor water quality.

● This July the San Francisco Regional Water Quality Board released its 2022 Confined Animal Inspection Reports, which identified the need for immediate corrective actions in four of the six dairies operating in the seashore.

These results are consistent with the last time the National Park Service tested for water quality, from 1999 to 2013. The results were used in a 2017 report published by the Center for Biological Diversity that ranked Point Reyes National Seashore in the top 10% of U.S. locations most contaminated by feces.

“Manure, fecal coliform and E. coli runoff from cattle operations earned Point Reyes National Seashore a high spot on the ignominious list of America’s Crappiest Places in 2017,” said Jeff Miller, a senior conservation advocate with the Center. “This degree of water pollution, which threatens aquatic habitat and public health, shouldn’t be happening anywhere, and definitely not in a national park.”

The new report analyses 125 samples, collected over 14 monitoring events and conducted by more than 30 rigorously trained volunteers who were supervised and led by Lovell between October 2021 and January 2022. It followed water quality testing methodologies laid out by the San Francisco Bay Regional Water Quality Control Board, the California State Water Resources Control Board, and the U.S. Environmental Protection Agency.

“For years the water pollution problem on seashore creeks and beaches has lingered, impacting salmon and marine life,” said Laura Cunningham, California director at Western Watersheds Project. “Manure management is not working, and runoff after rainstorms is contributing to human health hazards in national seashore creeks and the ocean. The Park Service needs to do better.”

The Coastal Commission has attempted to keep the National Park Service accountable since April 2021, when it gave conditional approval to the park’s controversial plan to extend leases of 24 commercial beef and dairy operators for 20 years. To secure the commission’s approval, the Park Service had to submit a water quality strategy by April 2022 to address pollution in the national seashore. At that most recent April meeting, the commission voted unanimously to reject the prior version of the plan due to its inadequacy.

“This latest report, the most extensive water quality testing in a decade, shows once again that having thousands of privately owned cows inside a national park unit is a bad idea,” said Jack Gescheidt, tule elk consultant for In Defense of Animals. “Millions of gallons of annual bovine feces and urine inevitably find their way into park waterways where an unsuspecting public wades, paddles and splashes. Point Reyes is the antithesis of the pristine haven for wild animals — and visiting humans — the public expects in America’s national parks.”

On Sept. 8, the Coastal Commission will review the National Park Service’s second attempt at a water quality strategy, which could have massive ramifications for the future of the Seashore.

The Center for Biological Diversity is a national, nonprofit conservation organization with more than 1.7 million members and online activists dedicated to the protection of endangered species and wild places.

Turtle Island Restoration Network (TIRN) is a global ocean conservation nonprofit based in Olema, California whose mission is to inspire and mobilize people around the world to protect marine biodiversity and the oceans that sustain all life on Earth.

In Defense of Animals is an international animal protection organization based in Marin County, California, with over 250,000 supporters and a 39-year history of fighting for animals, people, and the environment through education, campaigns, and hands-on rescue facilities.