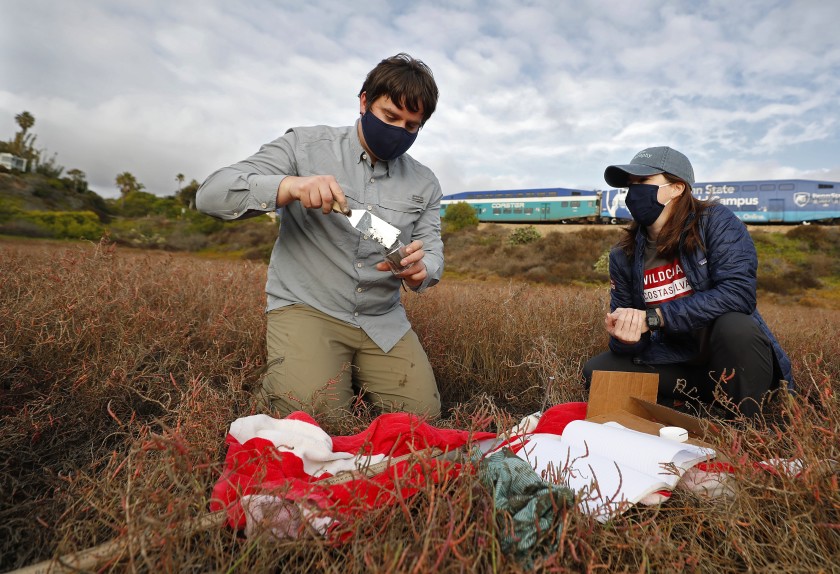 Recently, scientists with the conservation organization Wildcoast and Scripps Institution of Oceanography started studying how much carbon coastal wetlands can capture, and how to restore these environments to boost that capacity.

“They are the best ecosystems on the planet for taking carbon out of the atmosphere and storing it in the ground for a long time,” said Matt Costa, a postdoctoral researcher with the Center for Climate Change Impacts and Adaptation, as he took sediment samples from a corner of San Dieguito Lagoon on an overcast day earlier this month.

The salt marshes and seagrass beds that dot the San Diego County coast are some of the most biologically productive places on Earth, brimming with fish, waterfowl, crustaceans and insects. Most were destroyed during decades of development, as cities and subdivisions grew up on the coveted beachfront land.

Only about 10 percent of California’s original wetlands remain, but those that do play an outsize role in coastal environments, sheltering shorebirds, nurturing fisheries and filtering water. They can also counter the effects of climate change by buffering storm surges, and even help reduce the rate of warming by capturing carbon. Researchers refer to this process in lagoons and wetlands as “blue carbon.”