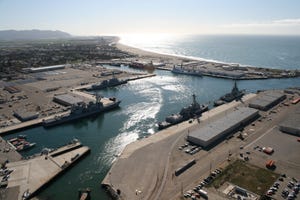 The Port of Hueneme and Naval Base Ventura County have entered into an agreement aimed at relieving congestion at Los Angeles County ports in time for holiday shopping.

Under the joint-use agreement, the port has access to Wharf 3 within the naval base, along with two buildings and about 31 acres of land within and outside of the wharf, according to a joint statement. Typically the space, which sits right next to the port, is used by the Navy to tie up war ships, said Drew Verbis, a base spokesman.

Since the agreement was activated in early November, the port as been able to welcome a large cargo vessel at Wharf 3 and offload multiple 40-foot containers filled with merchandise that is expected to have a direct impact on holiday shopping demands, according to the statement.

It is the first time in over 10 years that the 2002 joint-use agreement has been activated, Verbis said.

“This collaboration is in full force today as we work together on ways to address the supply-chain crisis,” Kristin Decas, port director and CEO, said in a statement.

The large ships that are currently waiting to unload their goods at the port of Los Angeles and Long Beach can’t fit in the Port of Hueneme, but ships that carry up to 1,500 containers can be accommodated locally, said port spokeswoman Dona Toteva Lacayo by email. The port has been helping to relieve the backlog of ships in LA county by mooring smaller charter ships from Asia, she said.