West Coast
The Schneider family home sits in a stalled state of construction at the end of Walker Point Road. 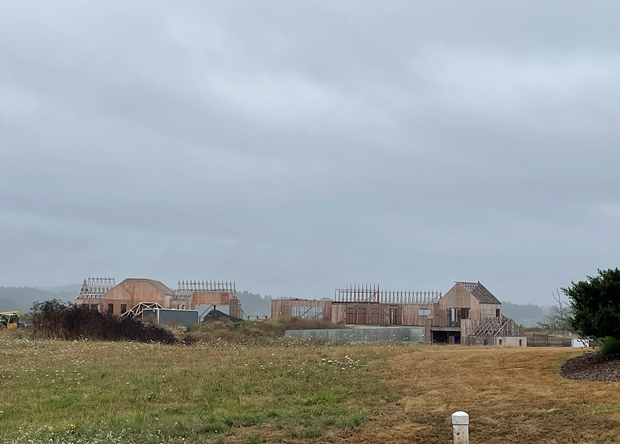 CA - Opinion: The Coastal Commission is Not the Enemy, Developers Flouting the Rules Are the Real Problem

Sure, an 8,000-square-foot house sounds crazy to those of us who somehow managed to raise three children in humbler accommodations, but saying you wouldn’t do something is always easier when that something isn’t an option.

If I had the money to build a mansion, maybe I would! But what I wouldn’t do is choose to violate established laws designed to lessen its impact on the animals and plants or historical areas nearby.Society generally holds that the people have the right to a healthy environment, and that our government is responsible for protecting this right on both public and private property. If you go to the park and find the trees chopped down, you might be bummed. If your neighbor’s septic tank is leaching into the creek by your house, you might be even more bummed. When a developer breaks the rules, you may not personally see or feel the damaged landscape, but it exists nonetheless.

The government is supposed to try to prevent this stuff in the first place and to respond when these types of violations occur. That’s why we have city councils, county supervisors, planning commissioners and, in the case of the state, the California Coastal Commission, whose job it is to explicitly ensure the Coastal Act is being upheld throughout the state. The Coastal Act is the law that says coastal lands should be protected. At the local level, Coastal Act concerns are represented through what’s called a Local Coastal Program (LCP) that county and city officials are responsible for enforcing. When our local officials fail to protect the general public interest, the Coastal Commission becomes the public’s last line of defense in protecting our shared environment from being harmed. Unfortunately, some developers (and sometimes city and county staff) have successfully cast the Coastal Commission as something to be overcome.

Take recent conversations generated by Travis Schneider’s building violations. Instead of asking, “Can Humboldt County Planning Commission staff find a path forward that will be agreeable to the California Coastal Commission?”

More accurate questions would be, “Can Travis Schneider bring his currently illegal project into compliance with Humboldt County’s Local Coastal Program?” or, “Can Schneider make up for the damage he’s caused so far and finish building his giant home in a way that’s legal and fair?”

The Coastal Commission will only become involved if the Humboldt County Planning Commission fails to do its job of protecting our common interests by enforcing the law.To summarize, Schneider veered from his original permit when he: • Built his home in a different place than approved.

• Built his home closer to wetlands than he was supposed to.

• Bulldozed what’s referred to as “environmentally sensitive habitat,” an area where plants and animals are either rare or especially valuable to the ecosystem.

• Bulldozed over a Wiyot cultural site.

• Cut a road in an area he wasn’t allowed to.

• Failed to get a required septic system permit before building.

If Schneider hadn’t done all this illegal stuff, then his big ol’ house would likely have been built by now and no one would have had to sit through hours of debate about what to do given the actual circumstances of his multiple violations. Tribal staff would not have had additional valuable time unnecessarily taken up.