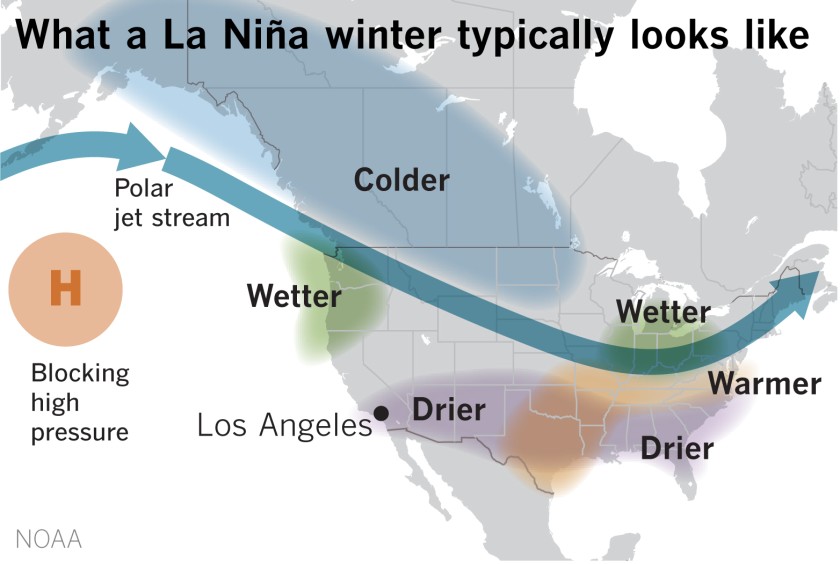 The National Oceanic and Atmospheric Administration issued a La Niña watch earlier this month, meaning that conditions are favorable for development of a La Niña in the next six months.

A La Niña typically means a dry winter across the southern United States, including Southern California. La Niña is part of a climate phenomenon called the El Niño-Southern Oscillation, often referred to as “ENSO.” It has nothing to do with the Ensos or their icy planet Ensolica in Star Wars, but La Niña is the cool phase of this climate phenomenon, and the opposite of its warm sibling, El Niño.

Between the two phases there is a neutral phase that’s neither El Niño nor La Niña — what climatologist Bill Patzert calls “La Nada.” That’s where we find ourselves at the moment — and where we expect to stay through the summer. But NOAA predicts that there’s a 50% to 55% chance of our current neutral phase shifting into a La Niña this fall and winter. Hence the watch. But there’s also a 40% to 45% chance, according to NOAA, that we will remain stuck in neutral for the fall and winter. In addition, there’s about a 5% to 10% chance of an El Niño developing.

While El Niño is usually associated with unrelentingly drenching winters in Southern California, La Niña is associated with drought. Patzert calls La Niña the “diva of drought,” and La Niña winters can be parched and fire-prone.

But California’s rainfall can be variable, as Jan Null of Golden Gate Weather Services points out. As an example, he cites the back-to-back winters of 2016-17 and 2017-18. “One was very wet, and one dry. Both weak La Niñas.”