West Coast
High-tide waters hit the base of the bluffs at Grandview beach in north Encinitas Thursday. Bill Wechter / The San Diego Union-Tribune 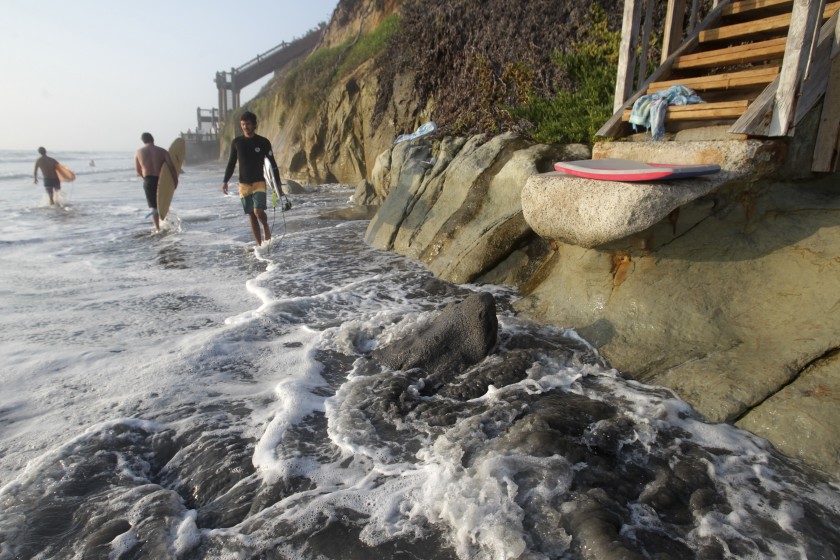 A long-anticipated project to beef up beaches in Solana Beach and Encinitas with sand delivered at five- and 10-year intervals for 50 years just got a little closer.

Solana Beach approved an agreement last week with Encinitas and the U.S. Army Corps of Engineers for the pre-construction engineering and design of the Coastal Storm Damage Reduction Project authorized by Congress in 2016.

The three-year planning, engineering and design phase of the program is expected to cost about $3 million. Most of the expense will be covered by federal and state grants already in hand. The two cities each have agreed to pay $75,000 as their share of the planning expense.

Sand dredged from nearby offshore sites could begin arriving on the shores of Solana Beach and Encinitas as early as 2024, Wade said.

Construction of the entire 50-year project was estimated at $167 million in 2015 costs, according to the Corps of Engineers. Completion depends on continued funding from the federal, state and local governments over the life of the effort.

Sand replenishment is considered the “soft solution” for shoring up San Diego County’s eroding beaches and bluffs. The other options include sea walls and revetments, often called “armoring” the coast. Environmentalists and the California Coastal Commission, which overseas all coastal development in the state, oppose armoring because studies show the structures can contribute to erosion.

Retreat is another option often discussed and requires removing structures in the path of erosion. While widely supported by environmentalists as the best solution, most coastal property owners would rather fight erosion than retreat from it.