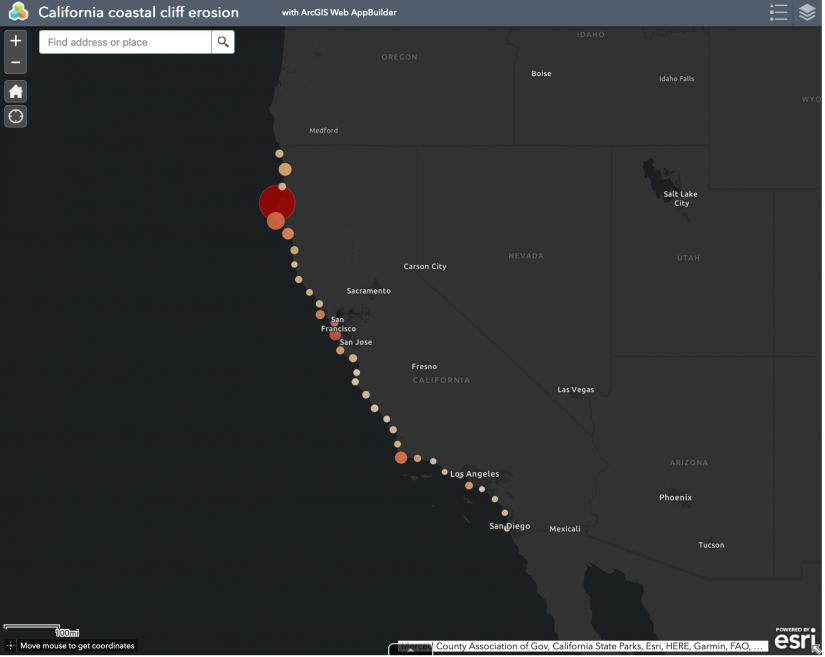 The first study to analyze California’s coastal cliff retreat statewide using high-resolution data has found that cliffs receded faster in the north than elsewhere in the state during the study period.

But the study, which covered 866 kilometers (538 miles) of cliffs, detected erosional hotspots in central and Southern California as well.

“It’s probably the largest high-resolution cliff erosion study ever conducted, and provides the first detailed erosion rates for several parts of the state,” said coastal geomorphologist Adam Young of Scripps Institution of Oceanography at UC San Diego. Young and Zuzanna M. Swirad of the Polish Academy of Sciences in Warsaw recently published their study in the journal Geomorphology.

Data from that study — funded by the California Ocean Protection Council and California Department of Parks and Recreation plus previous research funded by California Sea Grant — are now available on the website California Coastal Cliff Erosion Viewer. Users can browse any cliff in the state to see its past rate of erosion and related retreat statistics. The website is designed for coastal planning and development decision-makers, but the information may also be of interest to members of the research community, and the general public.

“Communities and critical infrastructure are located on the cliff top. It is really important to understand the hazard of cliff collapse,” said Swirad, a former postdoctoral scholar at Scripps Oceanography.

In their new study, Swirad and Young created one-meter digital elevation models and evaluated the cliff erosion and retreat between 2009-2011 and 2016 in five-meter (16.4 foot) segments along 866 kilometers (538 miles) of California’s coast. Erosion was detected along more than half of the cliffs.

Rates were typically higher in the north of the state and for cliffs with beachfront. The statewide retreat rates of both cliff faces and cliff tops averaged about six centimeters (two inches) annually. However the average values mask the effects of episodic collapses. Cliff top retreat rates exceeded five meters (16 feet) per year in some areas of Rancho Palos Verdes south of Los Angeles, an area south of Point Arguello near Vandenberg Air Force Base, Big Sur in central California, and Martin Beach south of San Francisco. Northern California locations with high retreat rates include Usal Beach, King Range, Centerville Beach, the McNeil Creek area north of Trinidad Head, and an area about two miles north of the Klamath River.

Included in the analysis were data collected with airborne LiDAR (Light Detection and Ranging), an advanced laser-imaging technology, during 2009-2011 and 2016. New machine-learning techniques that Swirad developed helped reduce the project’s manual processing and analysis time, expediting the large-scale study.

Large cliff failures can occur episodically making cliff-retreat projections based on averaged historical data challenging. In addition, retreat measurements made only at the cliff top do not capture landslides in the middle or bottom of cliffs. However, using LiDAR, Swirad and Young were able to measure both the cliff top change and changes within the cliff face.

The new results were compared to one of Young’s previous studies of southern and central California and yielded similar statistical results of cliff face retreat. These statistics help account for episodic erosional events, and help improve model predictions.

“Because we found statistical agreement with the previous time period, 1998 and 2009-2010, we may be more confident that the statistical approach is the way to do it,” Swirad said.

New statewide data collection began last year. This will provide a third time span to see if the statistical results remain consistent with those from the earlier periods. Still, the researchers find it difficult to isolate events that happen seasonally or annually such as El Niño events because the statewide data sets span five to 10 years. Such a large time span makes it hard for them to interpret the processes driving erosion such as pounding waves, groundwater, and rainfall.

“We need to survey the coast more frequently so we can better track how the coast is evolving and improve model predictions,” Young said. “We have the ability and technology to do this.

Young noted that coastlines are the only place on Earth where ocean, land, and atmosphere intersect.

“That makes it a fascinating place to study,” he said.

Young is also leading a team at Scripps on a new program that aims to accelerate the science behind coastal bluff failures. The research, authorized through State Assembly bill AB-66, will support enhanced coastal monitoring to better understand the timing of bluff failures.

Scripps Institution of Oceanography at the University of California San Diego is one of the world’s most important centers for global earth science research and education. In its second century of discovery, Scripps scientists work to understand and protect the planet, and investigate our oceans, Earth, and atmosphere to find solutions to our greatest environmental challenges. Scripps offers unparalleled education and training for the next generation of scientific and environmental leaders through its undergraduate, master’s and doctoral programs. The institution also operates a fleet of four oceanographic research vessels, and is home to Birch Aquarium at Scripps, the public exploration center that welcomes 500,000 visitors each year.

At the University of California San Diego, we embrace a culture of exploration and experimentation. Established in 1960, UC San Diego has been shaped by exceptional scholars who aren’t afraid to look deeper, challenge expectations and redefine conventional wisdom. As one of the top 15 research universities in the world, we are driving innovation and change to advance society, propel economic growth and make our world a better place. Learn more at ucsd.edu.