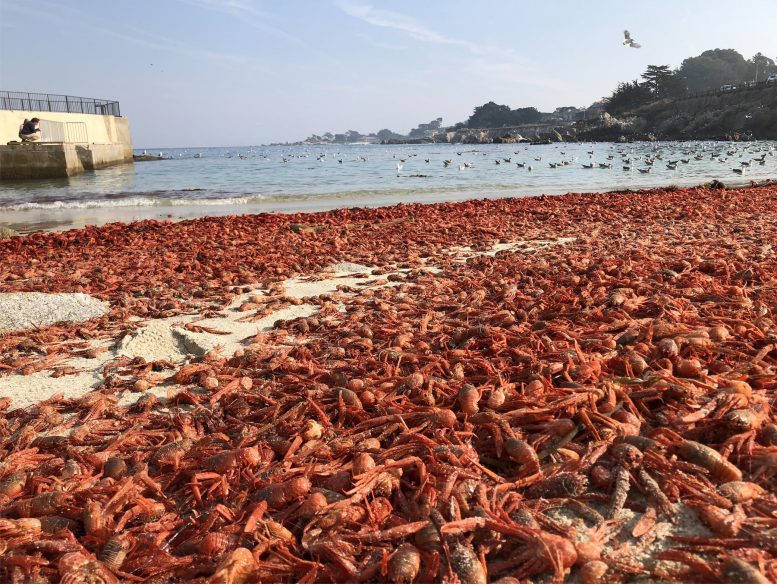 New findings suggest that abnormal ocean currents cause the occasional appearance of pelagic red crabs outside their native range.

For decades, people have wondered why pelagic red crabs — also called tuna crabs — sometimes wash ashore in the millions on the West Coast of the United States. New research shows that atypical currents, rather than abnormal temperatures, likely bring them up from their home range off Baja California.

Alongside the discovery, the scientists also created a seawater flow index that could help researchers and managers detect abnormal current years.

The new study, published on July 1, 2021, in Limnology and Oceanography, began after lead author Megan Cimino biked past a pelagic red crab stranding on her way to her office in Monterey in 2018. Cimino, a biological oceanographer at the National Oceanic and Atmospheric Administration (NOAA) and UC Santa Cruz through the Institute of Marine Sciences Fisheries Collaborative Program, had witnessed a different stranding near where she grew up in Southern California a few years prior.

“At that time, I had no clue what a red crab was, what was going on, why they would be there,” she said. “But it was very clear something different was going on in the ocean — something unusual.”

She brought the question to her colleagues, and the lab decided to dive into the mechanism behind the seemingly random appearances.

The group spent months compiling data about the crabs and their recorded range. They scoured oceanographic research surveys, video data from remotely operated vehicles, citizen science programs, and even online media, such as Twitter.

Integrating the different data types proved challenging, but eventually the team had a clear idea of the species’ range and strandings from 1950 to 2019.