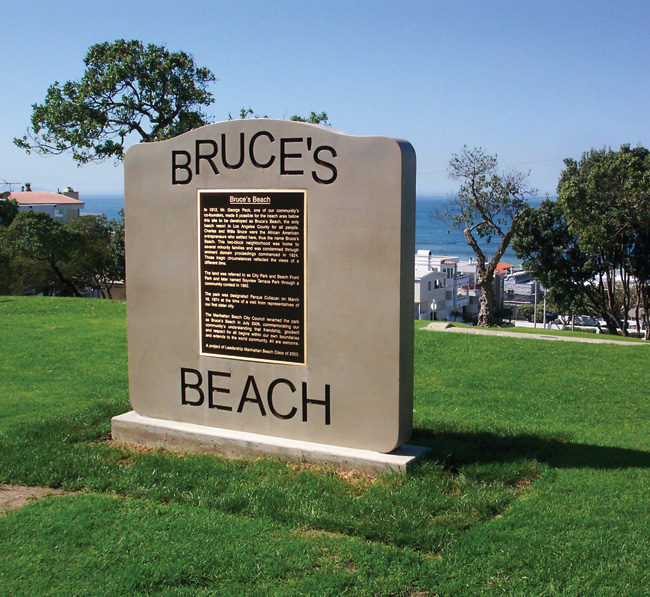 Bruce’s Beach has a historical past, one that is similar to other dark chapters found in the context of the American story.

The ocean wave plot was named after the original owners, Willa and Charles Bruce; they were the first Black landowners in Manhattan Beach. They purchased a couple coastal lots in 1912.

However, the City of Manhattan found a way to take ownership of their property.  Nearly a century later, Los Angeles County is revisiting the prospects of returning proper ownership of the beachfront to the descendants of the Bruce family.

Located on 2600 Highland Ave. in Manhattan Beach, CA, Bruce’s Beach served as an oasis for people of color looking to enjoy the scenic coast during times of segregation. According to L.A. Times, Willa and Charles Bruce purchased a piece of paradise for $1,225 ($33,034) and eventually bought another lot as well. Other Black families followed suit buying estates alongside them, and a Black community of beachfront property owners was created.

The hatred for such growth was not hidden; the L.A. Times reported that the vandalism and sabotage to Black-owned beach properties happened routinely during the Jim Crow era. The goal was to drive Black people out of these areas and have them sell their land. City officials would gradually obtain the Bruce’s beach, and other Black-owned coastal plots through an ordinant known as eminent domain.

Through the eminent domain procedure, certain members of the Manhattan community allotted City officials the power to acquire privately-owned properties and reinvent the lots for public use. The urgent takeover of Bruce’s land was for a public park.