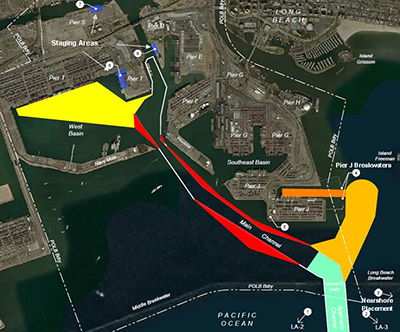 The Port of Long Beach has been given the next necessary approval for a new project to deepen its waterways.

On 6 July, Assistant Secretary of the Army at the U.S. Army Corps of Engineers Michael L. Connor issued a Record of Decision (ROD) on the Port’s Deep Draft Navigation Feasibility Study and Channel Deepening Project to improve navigation, commerce and safety by deepening channels, basins and berths and widening key passages.

“I find the plan recommended by the Chief of Engineers to be technically feasible, economically justified, in accordance with environmental statutes, and in the public interest,” Connor wrote.

Following the ROD, the Long Beach Board of Harbor Commissioners is scheduled to hold a public hearing to consider certification of the document on 12 September.

The Board themselves would also need to approve a harbour development permit to advance the project.

If the approvals go ahead, the port and the Army Corps would proceed with design and engineering agreements, detailed planning and budgets, the bidding process and construction contracts, and funding.

The ROD confirms the Channel Deepening Project has passed the scrutiny of multiple federal environmental laws – the Clean Air Act, the Clean Water Act, the Endangered Species Act, the Marine Mammal Protection Act, and the Coast Zone Management Act – and cleared the federal government’s cost-effectiveness to show it is a worthy investment.

The port and the federal government will share the cost, estimated at nearly $170 million.

“Improving our navigational waterways makes the Port of Long Beach a cleaner, more efficient international trade gateway that benefits all the communities who depend on our success,” said Port Executive Director Mario Cordero.

“This decision recognizes the national significance of our Port and allows us to move forward with a project that will yield enormous economic benefits for the country, the state and the greater Long Beach area,” said Long Beach Board of Harbor Commissioners President Sharon L. Weissman. “At the same time, it will improve the safety of Port operations and help lessen environmental impacts.”

The proposed project would build on previous dredging completed in 2014 that deepened most of the Main Channel to 76 feet.

The work is expected to yield more than 7 million cubic yards of dredged sediment.