A drill rig operated by Controlled Thermal Resources seeks out a superheated underground reservoir near the southern shore of the Salton Sea. The company plans to build a combined geothermal energy and lithium plant.(Gina Ferazzi / Los Angeles Times) 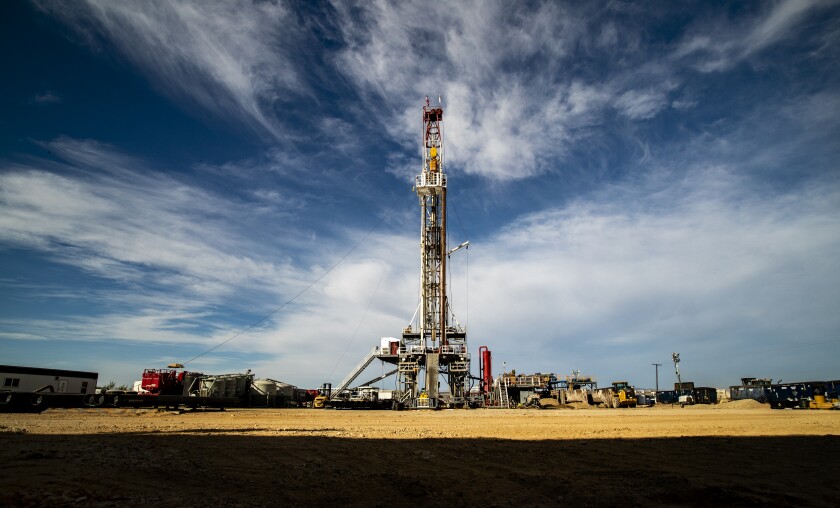 Barely a mile from the southern shore of the Salton Sea — an accidental lake deep in the California desert, a place best known for dust and decay — a massive drill rig stands sentinel over some of the most closely watched ground in American energy.

There’s no oil or natural gas here, despite a cluster of Halliburton cement tanks and the hum of a generator slowly pushing a drill bit through thousands of feet of underground rock. Instead, an Australian company is preparing to tap a buried reservoir of salty, superheated water to produce renewable energy — and lithium, a crucial ingredient in electric car batteries.

The $500-million project is finally getting started after years of hype and headlines about the Imperial Valley someday becoming a powerhouse in the fight against climate change. The developer, Controlled Thermal Resources, began drilling its first lithium and geothermal power production well this month, backed by millions of dollars from investors including General Motors.

If the “Hell’s Kitchen” project succeeds — still a big “if” — it will be just the second commercial lithium producer in the United States. It will also generate clean electricity around the clock, unlike solar and wind farms that depend on the weather and time of day.

“We know we can do it. Now it’s a matter of how well can we do it,” said Jim Turner, Controlled Thermal’s chief operating officer.

On a hot afternoon last week, hard-hatted workers crowded onto a platform next to the 170-foot derrick, using their hands to remove clumps of clay being coughed up from underground and threatening to slow the drill bit’s descent.

Other than that unexpected hitch, the operation was going smoothly. The drill had reached a depth of about 900 feet, on its way to a reservoir that seismic surveys showed would begin at about 4,000 feet, with temperatures of at least 600 degrees Fahrenheit.

The briny water is rich with lithium and other valuable minerals. Controlled Thermal is eager to reach that lucrative deposit.

“If we’re lucky, we’ll finish [drilling] before 40 days. But you don’t know until you actually get down there,” Turner said.