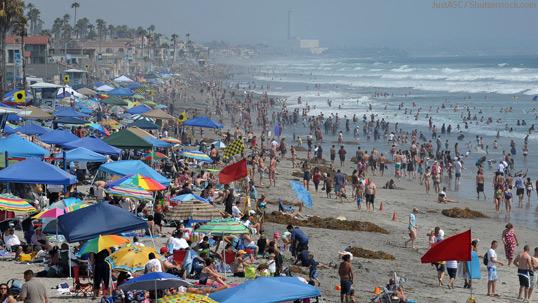 SAN DIEGO — In San Diego's Little Italy, there's never been more sidewalk dining. In Balboa Park, museumgoers are joining the joggers. In hotels from Coronado to Mission Valley, tourists are turning up.

San Diego County, where the desert meets the sea and the U.S. meets Mexico, now stands in the middle of a new sort of Venn diagram: For many weeks it has had the highest hotel occupancy rates on the West Coast and some of the lowest COVID-19 infection and death rates in Southern California.

These figures are welcome for local workers and visitors. The worry, of course, is that incautious tourists, or locals, could imperil everything.

As local officials and tourism leaders navigate the fine line between enough promotion and too much, visitors must make their own decisions.

With fewer restrictions in San Diego than in much of the rest of Southern California, is it time to eat a meal in a dining room rather than on another patio? Are you comfortable entering a museum? What if it's a flight museum, with rooms big enough to hold a dozen aircraft?

When Gov. Gavin Newsom loosened restrictions on Aug. 28, San Diego was the only Southern California county allowed to open most of its restaurant dining rooms, museums, movie theaters and places of worship at 25% capacity. (Eleven days later, Orange County was given approval to do the same.)

But plenty of risks remain. With the new semester of hybrid learning just a few weeks old at San Diego State University, county health officials have reported 400 COVID-19 cases among students. In response, the university on Sept. 2 shut down most in-person classes for at least a month.